Thanks to a grant from PETA, scientists in China are learning how to test cosmetics in a test tube instead of on animals. The Institute for In Vitro Sciences (IIVS), a global leader in the advancement of alternatives and known for its brilliant work in helping corporations switch from animal to non-animal testing, just held a seminar at Beijing Technology and Business University (BTBU) to teach Chinese scientists how to test cosmetics ingredients without using animals. The training was made possible by a new grant to IIVS from PETA—the second grant that we’ve given the group for its international work—to help purchase equipment needed for the course. PETA first became involved following our discovery that Avon, Mary Kay, and Estée Lauder had been secretly paying for tests on animals despite many years on PETA’s list of companies that don’t test cosmetics on animals. 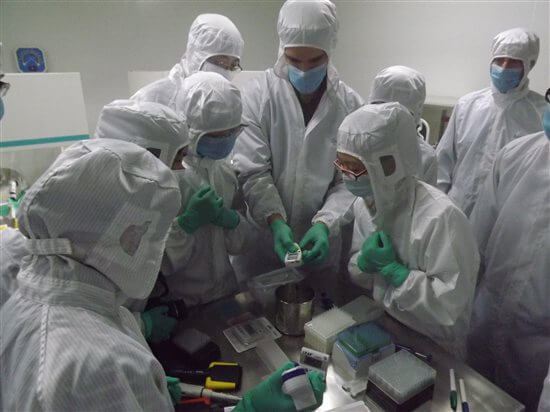 A Change Coming to China The Chinese government requires tests on animals before many cosmetics products can be marketed in that country. PETA (along with our friends at PETA Asia) is working to change that, and one key is having scientists who are ready to implement non-animal (in vitro) test methods. BTBU is home to the largest university program in cosmetics science in China, and the school is establishing a new laboratory to teach and conduct in vitro testing. About 30 students and faculty members took part in the training. With a $33,000 PETA grant—thanks to the McGrath Family Foundation, whose support makes this possible—IIVS was able to train participants on a procedure that can be used in place of the cruel Draize eye irritancy test performed on rabbits. As Dr. Rodger Curren, IIVS’ president, explained: Support from PETA has allowed the university to expedite the incorporation of hands-on training in non-animal (in vitro) methods to undergraduate, graduate and faculty at BTBU. Both faculty and students are enthusiastic about the training and planning for future sessions has already begun. What You Can Do Please buy cosmetics and personal-care products only from companies that don’t test on animals, and tell Avon, Mary Kay, and Estée Lauder that you won’t buy their products as long as they fund animal testing.