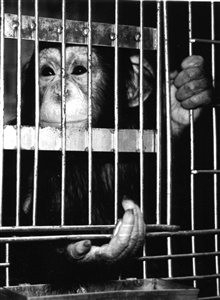 As part of a four-part series on chimpanzees in laboratories published this week, Wired.com tells the story of a chimpanzee named Katrina who was taken from her mother as an infant to be infected with HIV and hepatitis B and C, even though chimpanzees’ bodies don’t react to these diseases in the same way as humans’ do. Katrina was anesthetized almost 300 times by the age of 15 and was never given any painkillers after numerous invasive liver biopsies. This caged, lonely life, punctuated by fear and pain, so traumatized Katrina that she developed symptoms of severe post-traumatic stress disorder and has lost a third of her body weight.

Tragically, despite the fact that Katrina was supposedly retired in 2002, she is one of 14 chimpanzees who were sent to the Southwest Foundation for Biomedical Research eight years later for use in more invasive and painful infectious disease experiments. (Pressure from PETA and other groups successfully halted the transfer of 200 other chimpanzees.) Katrina’s plight graphically illustrates how high the stakes are in the fight to ban experiments on great apes.

The Wired series and another story that ran this week in The New York Times come just weeks before the Institute of Medicine’s scheduled December release of its report on the issue.

Last month, the editors at Scientific American came out in favor of banning experiments on chimpanzees. To continue to build momentum for the ban, please also post positive comments in response to the Wired and Times articles. Click here to ask your members of Congress to support the Great Ape Protection and Cost Savings Act, which would ban invasive experiments on all great apes and retire all federally owned chimpanzees currently in laboratories to sanctuaries.