J.R. has already spent more time in “jail” than many grand larcenists, arsonists, and murderers. J.R. is none of those things. He is a chimpanzee who is believed to have been torn away from his mother as an infant and then sent at a young age to perform confusing tricks in a circus. More recently, he spent a decade in solitary confinement in a cramped cage at a notorious North Carolina roadside zoo that was the subject of multiple PETA complaints before its federal license was suspended in 2008.

From there, J.R. was transferred to another roadside zoo, Buffalo Beals, which PETA has also repeatedly complained about to authorities. Confined alone to a cage no larger than a typical two-car garage, he wandered in aimless circles, screamed in frustration, and repeatedly bit his own arms, a heartbreaking symptom of captivity-induced psychosis.

Now, thanks to a wonderful supporter, J.R. has been transported to a tropical island paradise—the beautiful Save the Chimps sanctuary in Florida. There, J.R. is thriving. He has several acres of lush green grass to walk on, palm trees to relax under, “jungle gyms” to climb on, balmy weather to enjoy, and a natural, wholesome diet to eat. During his introductory period and between his frequent trips to one of Save the Chimps’ large, lush islands, he stays in the sanctuary’s “special needs” area with new friends, like Indie, a gentle and friendly female, who was the first chimpanzee J.R. met after many lonely years in isolation. Eventually, he will be integrated into a larger group of the sanctuary’s 250 resident chimpanzees. 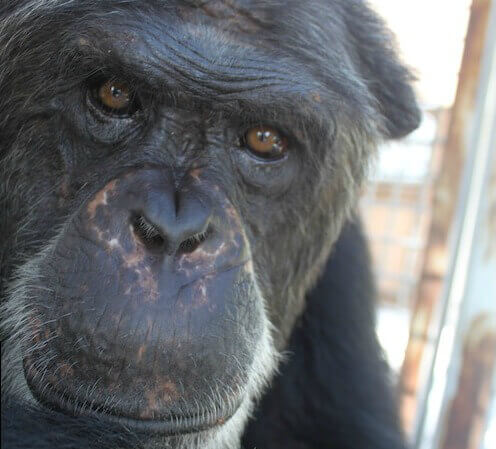 Whether they’re called “zoos,” “animal parks,” “refuges,” or even “sanctuaries,” don’t trust any place that sells admission tickets or rents out animals for TV shows, movies, commercials, or circuses. True sanctuaries are nonprofit organizations and generally are not open to the public on a regular basis. The humane way to learn about wildlife is to observe animals in nature, read books, and watch wildlife documentaries, not stare at depressed animals in cages.