In September, which is National Chicken Month, PETA’s bold new ad is upending how people think (or don’t think) about the chickens who end up on their plates. The ad features chickens running a focus group who are appalled to see what the word “chicken” means to a group of meat-eaters.

To the birds’ horror, the humans in their focus group describe eating chickens’ severed limbs in lurid detail. The ad is right on the mark—an online search for “chicken” turns up page after page of images of their dismembered, cooked bodies. The companies, lobbyists, and interest groups responsible for killing 9.2 billion chickens for their flesh in 2021 alone have worked hard to make sure people associate “chicken” with “food,” but chickens are living, breathing, intelligent individuals who don’t exist for humans to kill and eat.

Getting to Know Chickens

Chickens have complex social structures and dream, just like humans, and enjoy bathing by dusting themselves in the sun, roosting in trees, and spending time with their flockmates. But when they’re raised for human consumption, they experience none of these things. 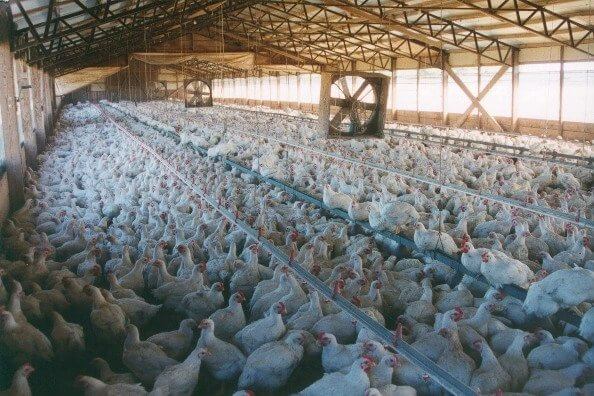 On factory farms, chickens raised for their flesh, called “broilers” by the chicken industry, spend their entire lives in filthy sheds with tens of thousands of other birds, where intense crowding and confinement lead to outbreaks of disease. They’re bred and drugged to grow so large so quickly that their legs and organs can’t keep up, making heart attacks, organ failure, and crippling leg deformities common. Many become crippled under their own weight and eventually die because they can’t reach the water nozzles. When they’re only 6 or 7 weeks old, they’re crammed into crates and trucked to slaughter.

A ‘Holiday’ of Murder and Sales Targets

National Chicken Month is a speciesist industry holiday created in 1989 by the National Chicken Council (NCC) in an effort to boost the “brand” of American chicken corpses—or in its words, “to help extend grilling season and greater chicken consumption into the fall.”

NCC members kill about 95% of the U.S. chickens used for food—its producers set the industry standard of intense confinement in which sickly and obese animals sometimes don’t even survive until slaughter.

Eating chickens or any other animals is completely unnecessary, since we can get everything we need from a balanced vegan diet. That’s why raising and killing over a million chickens every hour in the U.S. is unethical. It’s also unhealthy. Eating meat increases a person’s likelihood of suffering from cancer, heart disease, diabetes, strokes, and obesity. Meat is not a health food—it’s a slow poison.

Would you really feel comfortable eating chickens if you knew them as well as you know your cat or dog? Instead of helping the greedy, cruel chicken industry rake in profits this month, you could make a real difference for chickens—just like the ones in the ad—by going vegan.

Each vegan saves nearly 200 animals every year, including chickens. Our vegan starter kit can help you make the switch. Or if you’re already vegan, you can still order free kits to give to your friends and loved ones and start them down a path of compassion for chickens and all other animals.