Last Friday, the owner and the former manager of Global Captive Breeders, LLC (GCB), a rodent and reptile breeder and dealer in Lake Elsinore, California, were arrested and charged with more than 200 total counts of felony cruelty to animals following a two-month PETA undercover investigation at GCB that led to the rescue of more than 16,000 rats and hundreds of reptiles. Not only was this the largest seizure of animals in California history, it also was the largest rescue of neglected rats in U.S. history.

Rats don’t always get a fair shake, but authorities in this case rightly treated their abuse with the gravity it deserved. We’d like to see a lot more people treat rats with more kindness and consideration, and here are five reasons why:

When Dr. Jaak Panksepp, professor of veterinary and comparative anatomy at Washington State University in Pullman, tickled rats’ tummies, they laughed in high-pitched chirps that are inaudible to human ears without special equipment.

In a study conducted at the University of Chicago, rats responded to other rats’ cries of distress and let them out of an uncomfortable tube, even if it meant forgoing a food reward to do so.

Rats have an extremely wide range of vision and can move their eyes independently of one another. In essence, they have eyes in the back of their heads.

Rats and mice are so smart that they can recognize their names and respond when called.

In The PETA Practical Guide to Animal Rights, PETA President Ingrid E. Newkirk writes about a woman who recalled watching a mother rat groom her babies and teach them to shell the peanuts that the woman left out for them and to dart and run if danger approached. The mother rat dipped the babies’ paws in water and smoothed the fur around their ears and faces while they obediently sat still with their arms around their mother’s neck. 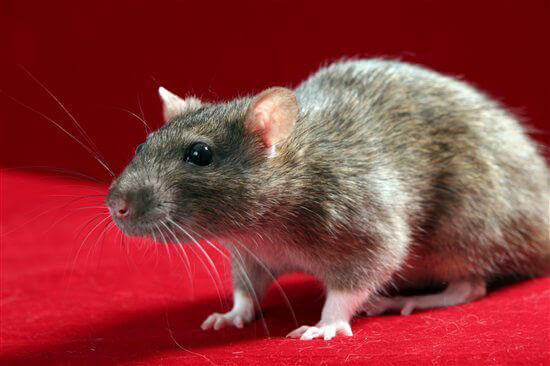 Ready to fight for rats’ rights? Visit our animal experimentation and wildlife pages to find out what you can do to help.