It was a horrifying sight. The dog’s bloated body was spotted off a pier behind a Newport News, Virginia, boatyard. The young black-and-white female pit bull had apparently drowned, as indicated by her clenched teeth and protruding tongue. But most chilling was that she likely hadn’t wound up in the water by accident: Tied to her red-and-black harness was an 11-pound weight that looked like the head of a sledgehammer. This dog was almost certainly thrown into the water and left to struggle for air until she could struggle no more. 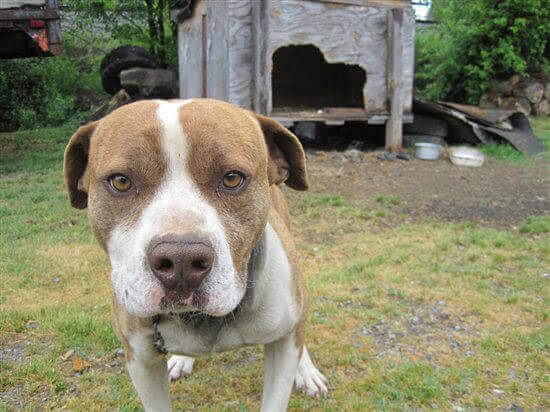 Since the dog’s body was found in the hometown of Michael Vick’s ”Bad Newz Kennels,” where dogfighting and pit bull abuse are still serious problems, we can’t help but fear the worst: that she was bred, trained, and/or used for fighting; either wasn’t “game,” lost a fight, or got sick; and was meant to “retire” at the bottom of the James River.

As we learned from the Michael Vick case, unwanted “fighting dogs” are often killed in the most horrific ways. Vick and his cohorts admitted to hanging, shooting, electrocuting, drowning, and slamming to the ground dogs who didn’t “perform” well.

While we may never know if this dog was used for fighting, we do know that someone did not want her body to be found. A necropsy report indicates that she suffered a shattered rib, probably inflicted by the heavy weight when she was thrown into the water. She had recently given birth and may have experienced complications.

We are offering a reward of up to $5,000 for information leading to the arrest and conviction of the person or persons responsible for this heinous crime.

If you ever suspect anyone of participating in dogfighting, alert authorities immediately. Dogfighting is a felony in all 50 states and is often associated with other serious crimes, including domestic violence, gang activity, and illegal drugs, firearms, and gambling. Signs of dogfighting include the presence of multiple pit bulls chained up in a backyard and paraphernalia such as treadmills and heavy logging chains.