Yesterday, the judge in the Department of Justice’s (DOJ) case against notorious animal exhibitor Jeff Lowe; his wife, Lauren Lowe; and associated businesses approved an agreement that permanently bars the Lowes from ever again exhibiting animals to the public and from regaining custody of the dozens of animals who were confiscated by the DOJ, including tigers, lemurs, and numerous additional species.

The court also entered a default judgment against the Lowes’ associated businesses, declaring that the corporations violated the Endangered Species Act (ESA) based on the DOJ’s complaint allegations, which included prematurely removing big cat cubs and lemur pups from their mothers, failing to provide ESA-protected animals with adequate veterinary care, failing to provide ESA-protected animals with an adequate diet, failing to maintain sanitary conditions, and failing to maintain adequate and safe enclosures.

The DOJ has ensured that Jeff and Lauren Lowe’s days of exploiting big cats are over, and it seems that no more wild or exotic animals remain in their clutches. PETA is celebrating today’s judgment and urges the public to help put other Tiger King–style villains out of business by avoiding cruel cub-petting operations like animals’ lives depend on it, because they do.

The DOJ’s lawsuit relied on arguments from and precedent set by PETA’s victorious ESA lawsuit against Jeff Lowe’s former business partner Tim Stark, which resulted in PETA’s confiscation of three lions (including Nala below) from Lowe’s custody who are now thriving at The Wild Animal Sanctuary in Colorado.

Relief appears to be on the way for 61 animals—including a porcupine, bobcats, lemurs, raccoons, and a camel—left behind at the seemingly abandoned Tiger King Park in Oklahoma. The U.S. Department of Justice (DOJ) has stated that infamous Tiger King player Jeff Lowe and his partner, Lauren Lowe, have “abandoned their right, title, and interest in the animals remaining” at the facility. This progress follows years of campaigning by PETA and other animal protection groups that have advocated for big cats and other species suffering at roadside zoos. PETA had previously provided evidence that helped the DOJ seize 69 big cats from this facility.

It’s anticipated that the DOJ will pick up the animals remaining at Tiger King Park by Friday, August 20.

Just weeks after officials from the U.S. Department of Justice seized 69 big cats (protected under the Endangered Species Act) from Tiger King Park, operated by Jeff and Lauren Lowe—based in part on evidence provided by PETA—the two were reportedly arrested by Oklahoma City police and taken into custody in the early morning of June 5 on suspicion of driving under the influence of alcohol. Both were allegedly seen driving by police. Reports indicate that they were slurring their speech and that Jeff failed a field sobriety test before the couple was taken into custody. These actions are just one more entry on the laundry list of legal issues for the Lowes. Read about how PETA is working to shut down this industry and take action for big cats below. 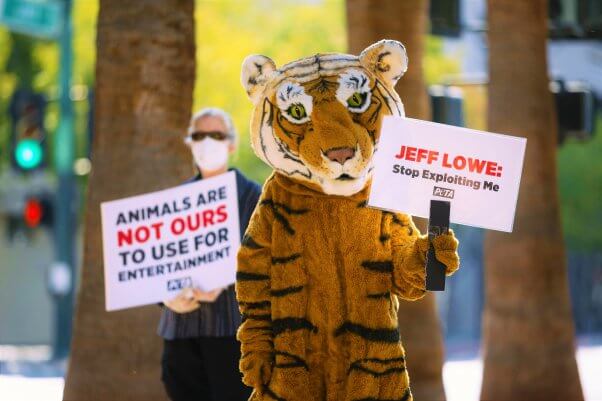 How PETA Played a Role in These Big Cats’ Removal

The DOJ’s search and seizure warrant was based in part on evidence obtained by PETA’s lawyers in January 2021, including admissions that we elicited regarding ongoing big-cat breeding (in violation of a court order) and the “neurotic behavior” of a jaguar; testimony we elicited from Jeff Lowe that he housed big-cat cubs and juveniles in his home and let employees take big-cat cubs home with them; and evidence regarding the condition of lions we rescued from him last September.

And if PETA has our way, every Tiger King villain will lose all other animals in their custody, too.

Keep scrolling to learn about how, for years, PETA repeatedly alerted the U.S. Department of Agriculture to the ongoing suffering and neglect at the hands of the Lowes (including with telling whistleblower photos and video footage)—and to help big cats still languishing at other roadside zoos.

Earlier this month, just some days after it suspended Jeff Lowe’s license for at least three weeks, the U.S. Department of Agriculture (USDA) filed an Animal Welfare Act (AWA) complaint alleging dozens of willful violations of federal regulations by Lowe and his wife at the Greater Wynnewood Exotic Animal Park (aka “G.W. Zoo”) – a roadside zoo that became a household name thanks to Netflix’s Tiger King.

The USDA is asking the court to consider assessing all warranted civil penalties, as well as permanent revocation of Lowe’s license and permanent disqualification of his wife, Lauren Lowe, from obtaining an AWA license. Read more below for information on just a few of the apparent violations that prompted this enforcement action.

Despite reports that the notorious Greater Wynnewood Exotic Animal Park (aka “G.W. Zoo”) is closing to the public, the animals imprisoned at the roadside zoo currently operated by Jeff Lowe will remain there for now. 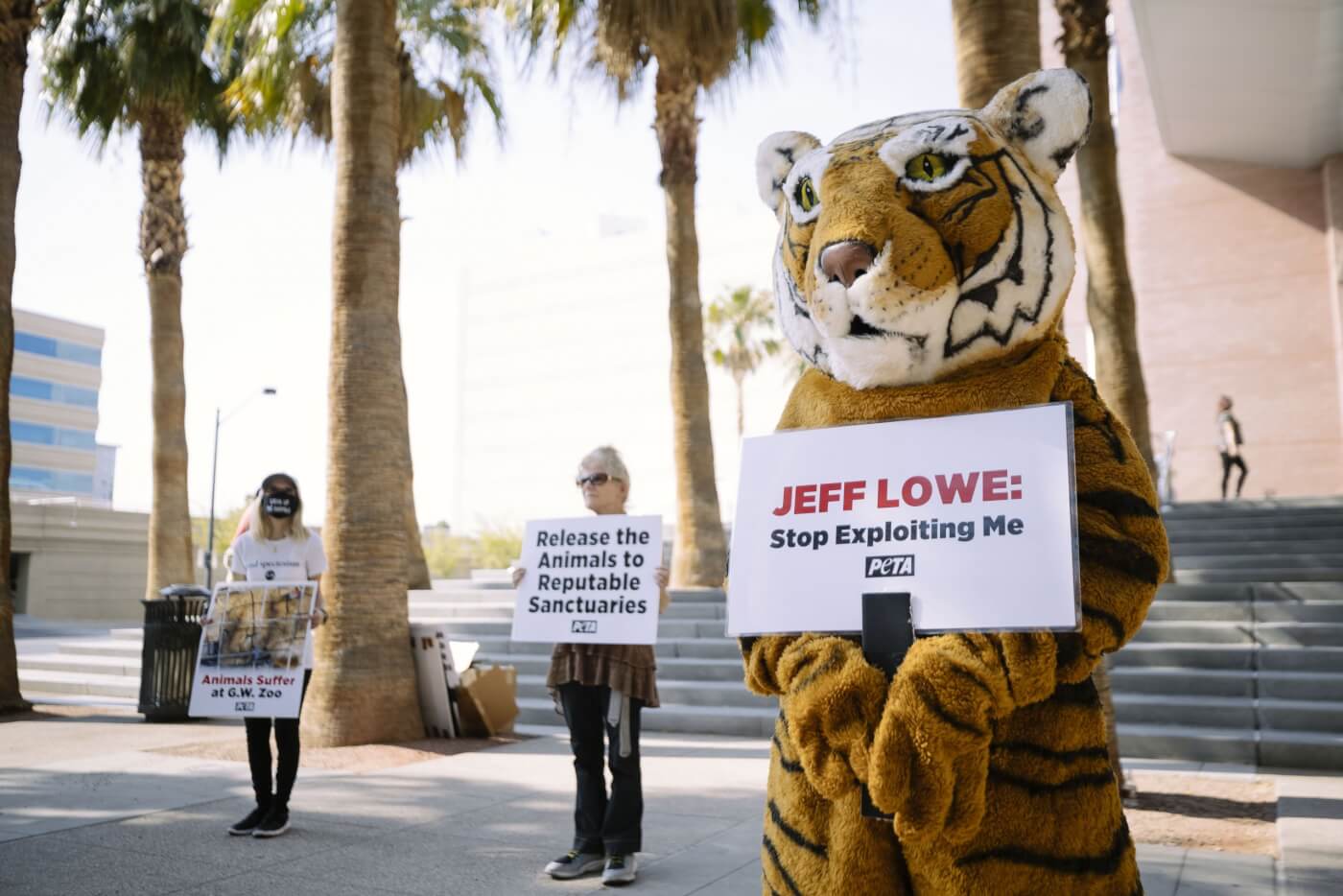 What Happened to Jeff Lowe Since ‘Tiger King’?

The U.S. Department of Agriculture (USDA) suspended his federal Animal Welfare Act exhibitor’s license. Lowe cannot exhibit big cats, bears, primates, or other USDA-regulated species at the G.W. Zoo or any other property, including his reportedly forthcoming new roadside zoo in Thackerville, Oklahoma.

This rare step of a license suspension follows an unprecedented move by the USDA: In June, it halted its inspection of the facility and ordered Lowe to seek immediate veterinary care for a juvenile lion named Nala, who was lying in mud, lethargic, depressed, and thin. (Read more about her and the appalling conditions that Lowe kept other big cats in below.)

In another recent inspection, agents found a geriatric wolf, with little more than hay on a concrete floor for bedding, reluctant to rise. A fisher cat, who had been identified as lame and suffering from hair loss during a previous inspection, still had not been examined or treated by the attending veterinarian. Agents also found decaying food, apparently intended for the animals, inside a dysfunctional refrigeration truck. And a juvenile lion was able to access the top of her enclosure fencing, where she could have easily escaped or fallen to her death.

PETA applauds the USDA’s decision and urges it to pursue permanent license revocation. We look forward to seeing every one of the long-suffering animals at the G.W. Zoo transferred to an appropriate facility where it won’t take federal intervention for a sick cat to receive veterinary care.

An inspection of Lowe’s facility by the U.S. Department of Agriculture (USDA) just became publicly available. On June 22, the agency found several animals in need of veterinary care, including one young lion who required immediate help, and the decomposing bodies of others, which were contributing to the flystrike issues seen on many animals there.

PETA has repeatedly alerted the USDA to the ongoing suffering and neglect at G.W. Zoo, including just last month when a whistleblower provided us with photos and video footage of juvenile lions suffering from severe flystrike. 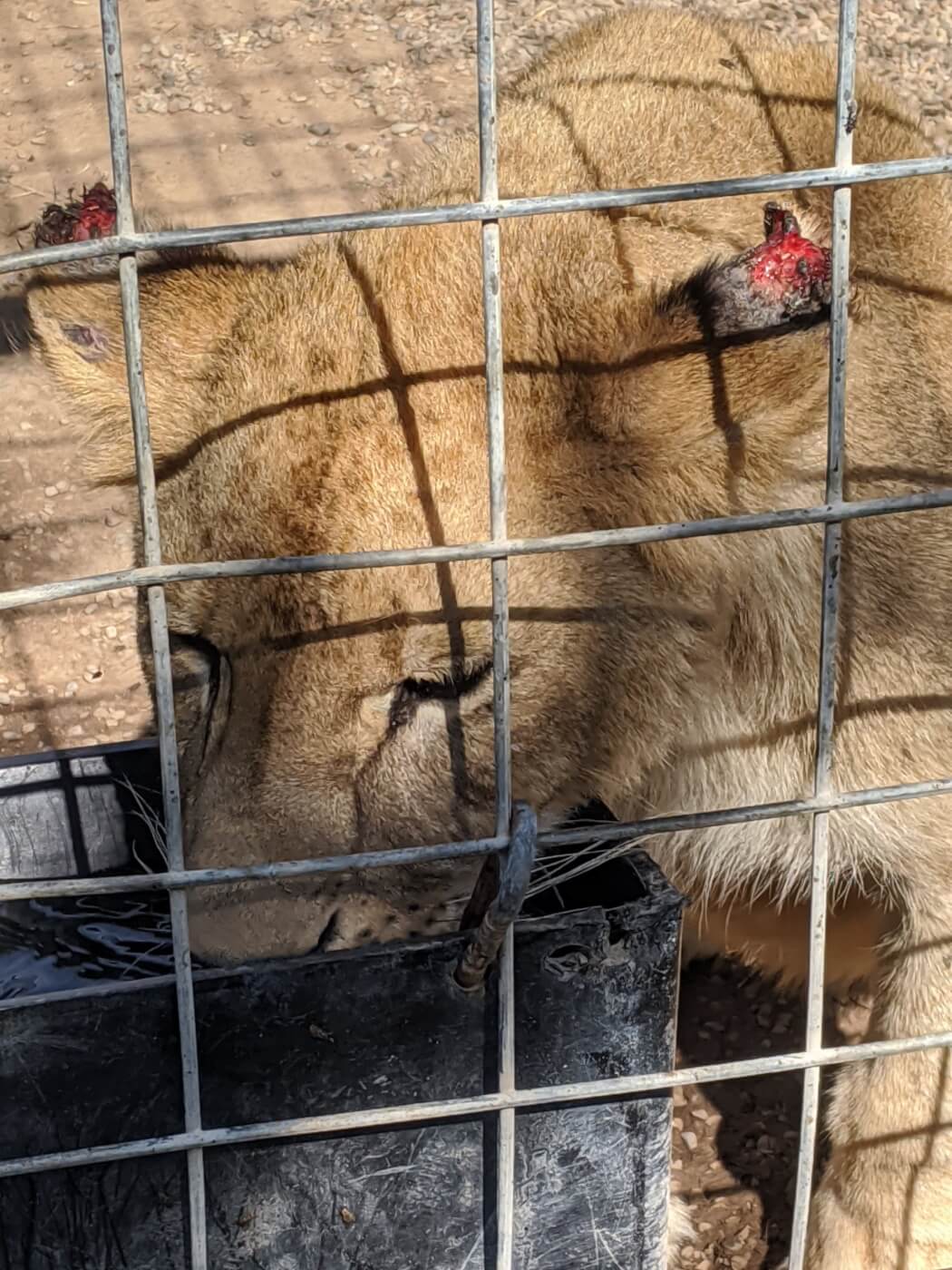 Flystrike, which can occur at facilities with poor sanitation practices, is a painful condition—and photos of one lion’s ears show that they’re raw and bloody, with damaged tips.

Among the citations Lowe received is a critical violation for not contacting a veterinarian regarding the health of  a 17-year-old big cat. Lowe claimed that he died of renal failure, but he had not been examined by a veterinarian for diagnosis and treatment.

Even though Lowe stated that the tiger had not been drinking as he should, he and his staff left the big cat untreated until he died.

The USDA also cited Lowe for leaving a partially-burned big cat carcass and other dead tiger in a large pile of debris.

The decomposing bodies caused a foul odor and attracted flies. The USDA stated that flystrike has been an issue at the facility and that it had resulted in “large patches of painful ulceration on the ears, and legs on numerous tigers, lions, and wolves.”

All the animals still held at G.W. Zoo are complex individuals who value their own lives. They all have unique personalities and emotions, and they all feel pain. No animal wants to languish with flystrike and other ailments.

G.W. Zoo’s animal neglect is so severe that it stopped the USDA in its tracks.

The agency had to halt its inspection and instruct the facility to obtain immediate veterinary care for a lion, stating, “‘Nala’…was lethargic, depressed, and thin and would not get up out of the mud from a sitting position even after prompting. … She had a string of purulent nasal discharge hanging from her right nostril and had an accumulation of green discharge in her eyes.”

This cub had been treated six days prior for ear wounds and toenail issues.

He’s also a defendant in PETA’s lawsuit against his former business partner Tim Stark. A federal court in Indiana recently ordered Lowe to give PETA records on four juvenile lions at his roadside zoo and to sit for a new deposition. He had stormed out of a prior deposition after complaining that it was “bullsh*t” for PETA Foundation counsel to call him out on one of his many falsehoods.

In early June, a federal court in Oklahoma ordered Lowe to vacate the G.W. Zoo land within 120 days and hand over the zoo to longtime foe Carole Baskin—an animal welfare advocate and the CEO of accredited wildlife sanctuary Big Cat Rescue.

The judge stated, “Vacation of premises shall also require removal of all zoo animals from the zoo land.”

The state of Oklahoma is also suing Lowe over delinquent sales taxes. The state is seeking repayment of at least $50,274.01 and injunctive relief, including that the park cease operation.

And because Lowe has continued to operate and collect revenue, even though his sales tax application was denied, he also faces criminal penalties of up to $5,000 in fines and up to one year in the county jail.

Tiger King is a docuseries from Netflix that sheds light on the story of Joe Exotic, a notorious abuser convicted for a murder-for-hire plot and wildlife-crimes, and other animal abusers such as Jeff Lowe and Tim Stark. The series also stars Brittany Peet, Deputy General Counsel for the PETA Foundation, who sheds light on PETA’s years-long campaign to help the animals abused by Joe Exotic.

Help Big Cats Like the Ones Suffering at G.W. Zoo

You don’t have to be a roadside zoo whistleblower to help animals trapped at highway hellholes like G.W. Zoo—you just have to care. Please, never support abusive animal shows or exhibits.

Tigers love water and enjoy bathing in rivers and lakes. They’re happy introverts who prefer spending the day on their own, except when there are cubs at home to raise. When they’re socializing, tigers will chuff or blow air out of their noses in short bursts to greet others.

Dive into even more fascinating facts and inspiring stories about animals and pick up Animalkind, the book that’s got readers and even celebs like Anjelica Huston and Alec Baldwin raving.