Spain’s national television network, RTVE, has announced that it is refusing to air bullfights, noting that it is inappropriate for children (and, we might add, anybody else) to see violence toward animals. Increasing opposition to bullfighting (according to a 2013 Ipsos MORI survey, more than 70 percent of Spaniards have no interest whatsoever in attending or supporting bullfights and more than three-quarters oppose using public funds to support the bullfighting industry; Catalonia has banned it; and Ecuadoran president Rafael Correa recently called it a “spectacle of violence”) might also have something to do with the move. 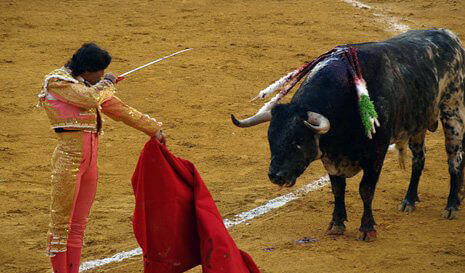 In the face of so much opposition, why does bullfighting still exist? In a word: tourists. If you travel to Spain, Portugal, or Central or South America, never patronize a bullfight, and if your travel agent includes tickets to bullfights in your tour package, ask him or her for a different itinerary.