Pro athletes don’t do anything halfway. So studly New York Jets safety Bret Lockett wasn’t content simply to pose with a strategically placed faux-leather football for his PETA anti-fur campaign. Instead, he decided to play spread offense and turn his ad unveiling into a whole weekend. First, he helped PETA dedicate our Norfolk, Virginia, headquarters to longtime supporter and Hollywood heavyweight Sam Simon.

Later that evening, Bret hosted an unveiling party at Hampton Roads hotspot the Granby Theater, greeted fans, and talked about why fur should be sidelined. “What really hurt me was when I saw that an animal was still able to move and lift [his] head up after he was completely skinned,” he said. “It brought tears to my eyes.” 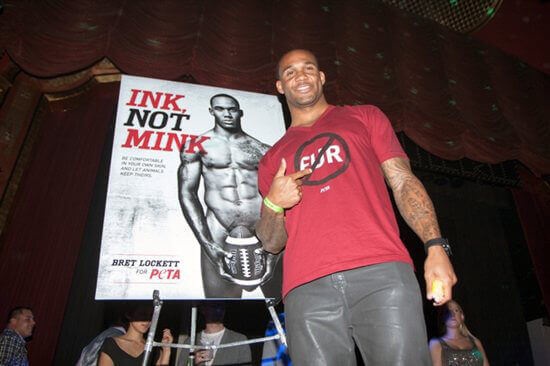 And the next night, he went with the PETA gang to laugh aloud as Bill Maher made fun of hunters and other animal abusers in his stand-up performance. All weekend, wherever he went, Bret dined on vegan food, sported PETA T-shirts, and enthusiastically discussed animal rights issues with fans who approached him.