The Bowmanville Zoo in Ontario continues to reveal its true colors. The latest incident to come to light was reported by two local residents who witnessed a woman, who appeared to be dressed in a zoo uniform and whom they assumed was an employee, firing what they believed to be a BB gun at a giraffe at least seven times. The witnesses saw other apparent staffers witness the shooting. One held what appeared to be a cattle prod and was yelling at the giraffe. It appeared that the staffers were trying to force the animal into an indoor enclosure.

The panicked giraffe reportedly ran around the enclosure as the employee repeatedly aimed and fired at the animal. The two witnesses left and returned to take video footage of the incident, but the giraffe had apparently entered a barn by the time they got back.  The witnesses subsequently gave sworn statements about what they had seen.

Giraffes are sensitive and skittish animals. Many have died after getting spooked and running into walls or fences. 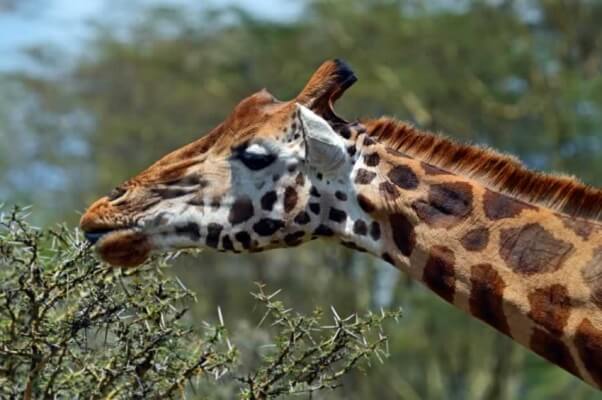 Of course, tormenting animals seems to be business as usual at the Bowmanville Zoo. In December, PETA released video footage in which owner Michael Hackenberger describes his cruel training methods, saying that punishment is the only way to force an animal to perform and boasting, “You smack ’em and they generally fold like a house of cards. … And that’s the beauty of these things.”

PETA’s observer confirms what these two witnesses reported, having obtained both audio and video evidence of conversations with zoo staffers that reference the use of a BB gun—both with and without ammunition—to coerce animals to move.

In the face of overwhelming public outrage, CBS dropped plans to hire Hackenberger to supply animals for its show Zoo, and he resigned as director after the Ontario Society for the Prevention of Cruelty to Animals lodged five cruelty-to-animals charges against him. Even though the Bowmanville Zoo is the oldest private zoo in North America, it’s closing its doors at the end of the 2016 season. A spokesperson cited PETA’s exposé as the reason.

Stay away from the Bowmanville Zoo and any other place that exploits animals.