This morning, dozens of sign-carrying, black-clad PETA supporters headed to the Special Operations Medical Association’s Scientific Assembly (SOMSA) in Charlotte, North Carolina. SOMSA’s theme, this year, is Back to the Future: Gaining New Ground and Preserving Lessons Learned, and protesters gathered to urge the military to gain ground by ending the maiming and killing of animals in training drills and adopting cutting-edge, human-patient simulation technology instead. 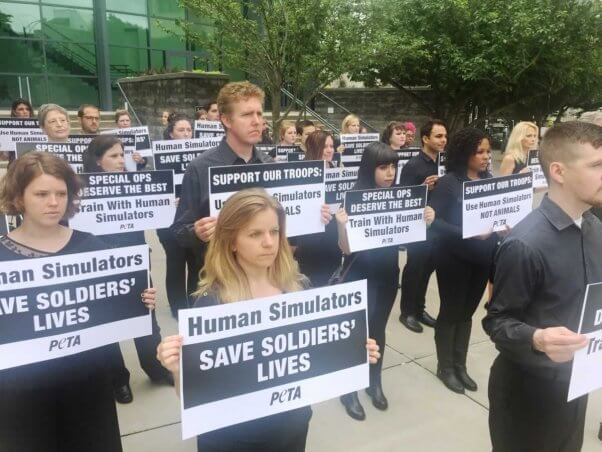 Service members are currently forced to cut off live goats’ legs with tree trimmers and shoot, stab, burn, and cut apart live pigs in medical trauma training exercises. A report published earlier this month by the U.S. Defense Health Agency called this use of animals “outdated and cost-prohibitive.”

A number of bases currently prepare personnel without harming animals, and last month, the Coast Guard suspended its use of animals in these training drills.

URGE YOUR REPRESENTATIVES TO CO-SPONSOR THE BEST PRACTICES ACT