False vegan stereotypes of white bourgeoisie eating $10 avocado toast with a side of raw kale are fading fast. Recent data reveals that nonwhite Americans are three times as likely as white Americans to describe themselves as vegetarian.

Now, I can’t speak to all the reasons why my brothers and sisters of color have cut back on eating animal flesh. Maybe they’ve seen shocking video footage from inside slaughterhouses, where sensitive animals suffer every single day in dank sheds before their throats are slit. Perhaps they’ve listened to warnings from United Nations scientists who have cautioned that meat consumption must decrease by as much as 90% in order for us to avoid the most catastrophic effects of climate change. There are plenty of reasons to treat fellow sentient beings with respect and dignity and to go vegan.

But I do know that living vegan is a political and revolutionary act against an unjust status quo. When it comes to people who look like me, here’s how going vegan positively impacts us and our communities:

Eating vegan challenges systemic oppression that has devastated our communities.

Decades of segregation, redlining, and other systemically racist city planning methods have driven down the property values of many communities of color. Food deserts severely affect Black and brown people. Meanwhile, cheap fast-food chains move in to capitalize on vulnerable populations—selling foods filled with cholesterol and saturated fats.

According to the American Heart Association, Black and brown people are disproportionately affected by obesity and are more likely to have diabetes than our white counterparts. The Centers for Disease Control and Prevention states that African Americans have nearly double the risk of dying early from heart disease or strokes as whites. Study after study links these ailments to eating animal flesh, eggs, and dairy. 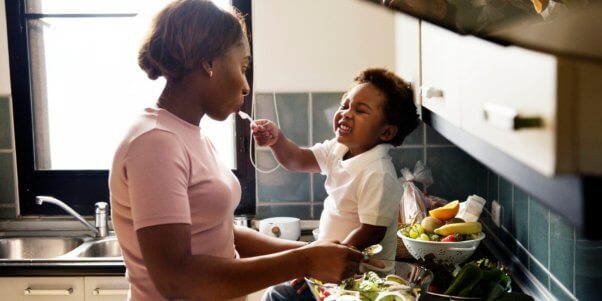 A Gallup study found that nine out of 10 people who reduced their meat intake said that they did so because of health reasons. It’s no surprise that more people of color are going vegan. It’s the means by which we resist eating habits that have destroyed our well-being.

Living vegan is a revolutionary act for decolonizing our bodies.

It may surprise readers that numerous vegan staples, including tofu, rice, quinoa, black beans, and seitan, originated in communities of color.

Authors Luz Calvo and Catriona Rueda Esquibel of the cookbook Decolonize Your Diet point out that for thousands of years, indigenous people of Mesoamerica generally ate plant-based. Many of the crops they grew, such as beans, corn, squash, and edible wild greens, are still staples in Latinx cuisine today. Spanish colonizers introduced meat, such as pork and beef, that has led to generations of health problems.

Plant-based eating has been a part of black traditions and cultures for centuries.

Bryant Terry, author of the cookbook Afro-Vegan, says that “for thousands of years, traditional West and Central African diets were predominantly vegetarian—centered around staple foods like millet, rice, field peas, okra, hot peppers, and yams.” Even in the face of colonization and chattel slavery, this culinary heritage has survived and thrived.

I look forward to a day when “slave food”—things our ancestors had to eat for survival—like chitlins (animal intestines), hog maw (pig stomach), lard, and pigs’ feet are left in the past where they belong. True soul food is nourishing and will improve our health and expand our compassion.

Animal agriculture is the backbone of environmental racism.

Pollution and climate change fueled by animal agriculture affect everyone, but while we all may be in the same storm, some of us grasp the sides of life rafts while others are on yachts.

As the Food Empowerment Project discusses, filthy farms and slaughterhouses are huge sources of pollution and are often located in or near Black, brown, and low-income communities. PETA discussed this disparity before when we reported how a rural, predominantly Black community suffered as urine and feces from a neighboring pig farm rained down on residents’ homes.

With generation after generation sickened by air, land, and water pollution from the meat industry, going vegan means taking a direct stance against environmental racism.

Eat for the revolution by going vegan today.

It takes courage to unlearn these destructive habits that have been taught by centuries of oppression and passed down through our families. There’s something powerful about taking back one’s health and consciousness.

Everyone can join the vegan revolution. You’ll prevent nearly 200 animals from enduring a horrifying death every year, and your body will thank you. So while the revolution continues to pop off, I’ll be over here at the cookout with my natural locks and abundant melanin, cooking up jerk tofu with a side of black-eyed peas. All the ancestors are invited.