Seventeen-year-old singer-songwriter Billie Eilish already saves hundreds of animals a year by being a proud vegan, and now she’s taking her activism a step further—this time, for sheep. She shared an anti-wool message with her more than 40 million Instagram followers yesterday, linking to PETA’s “P!nk Speaks Up for Sheep” video, which exposes the horrendous, hidden cruelty in the wool industry. 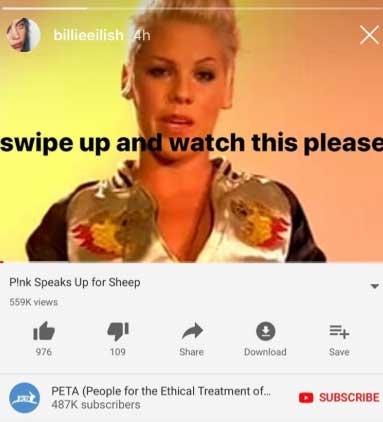 The video shows viewers the suffering that sheep endure in the Australian wool industry, including when chunks of skin and flesh are cut from their backside, often without any pain relief. The painful procedure is known as “mulesing” and is used by some Australian farmers in a crude and cruel attempt to prevent a maggot infestation called “flystrike,” even though humane methods of flystrike prevention are readily available.

The video that Eilish shared also informs viewers that the way wool is obtained is painful for sheep and that all those used for their wool are eventually killed. For example, 4 million live sheep used by the Australian wool industry are exported every year to the Middle East and North Africa for slaughter. They’re crammed together on multitiered ships for horrifying journeys across the ocean in all weather extremes.

Many of these animals have been discarded by farmers because they’ve aged and their wool production has declined. Those who don’t die during transport are dragged from the ships by their legs, and their throats are cut while they’re still conscious.

This kind of abuse isn’t limited to Australia. PETA has released 12 exposés of 100 wool-industry operations on four continents revealing that sheep are mutilated and abused for their wool and sometimes even skinned alive.

Take the advice of Eilish and P!nk: Ditch wool.

Don’t be the bad guy, duh. If a tag has “wool” listed on it, leave the item on the shelf and instead choose from the many animal-free materials available:

Do more by urging retailers to do the right thing and pull all wool items from their shelves:

Tell Retailers You’re Done With Wool—and They Should Be, Too