Recently, a video of a black bear who appeared to be eating alongside tourists at an indoor animal amusement park in Jinan, China, gained attention online– but according to reports, the incident was not a planned stunt for tourists. Reportedly, the video actually shows a bear who was able to get into the area where the trainer and other staff members were eating, revealing an apparent lack of safety regulations at the establishment.

No matter what “safety measures” are implemented, wild animals don’t belong in crummy tourist traps, where they’re treated like toys for photo ops.

The park has also reportedly posted multiple videos of black bears being forced to perform unnatural tasks, such as walking upright and holding red envelopes for New Year’s greetings. 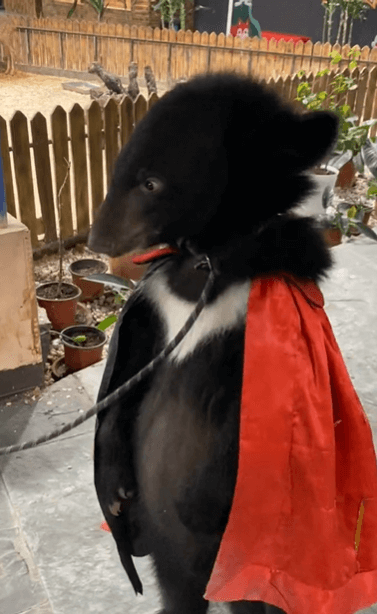 One user posted a video from the facility to a Chinese video platform, which features a young bear on a leash apparently being forced to walk and stand upright.

In nature, black bears will only briefly stand on their hind legs—but circuses and other cruel animal acts around the world often start “training” them to stand and walk from the time they’re young cubs by chaining them upright by their necks.

A PETA Asia investigation into the wild-animal entertainment industry in China revealed young bear cubs crying out as they were choked by chains to force them to stand upright and trainers beating bears into performing confusing tricks such as balancing on seesaws or walking on their hands.

Animals in the Circus Hit, Bullied, Chained, and Deprived from Official PETA on Vimeo.

Bears are highly intelligent and grieve deeply when they lose their loved ones. Cubs often moan and cry—sometimes for weeks—when they’re separated from their mothers.

Stay Away From Tourist Traps That Exploit Our Fellow Animals

Animals don’t want to be exploited or forced to perform for ogling tourists. You can help bears and other animals by never supporting roadside zoos, pseudo-sanctuaries, traveling shows, or any other business that exploits animals. Take action below to help bears suffering in tourist traps: