This morning, PETA sent an urgent letter calling on the U.S. Department of Agriculture (USDA) to investigate after eyewitness evidence showed that exhibitor Bob Steele of the Jefferson-based Great Bear Show repeatedly yanked a bear named Cindi by the chain around her neck on January 20, while in Pasco, Washington,  for a performance at the Tri-Cities Sportsmen Show.

Eyewitness video footage shows Steele hitting Cindi on the paw with a stick to force her to obey—typically an indication that even more harsh physical punishment is used behind the scenes. The bear, who cried out in apparent distress throughout the photo-op session, was also chained to a chair, with no visible barrier present to stop members of the public, including young children, from approaching her. When not being used for photo ops, she was confined to a barren cage with no enrichment, pool, or furnishings, where she paced back and forth, a sign of psychological distress. 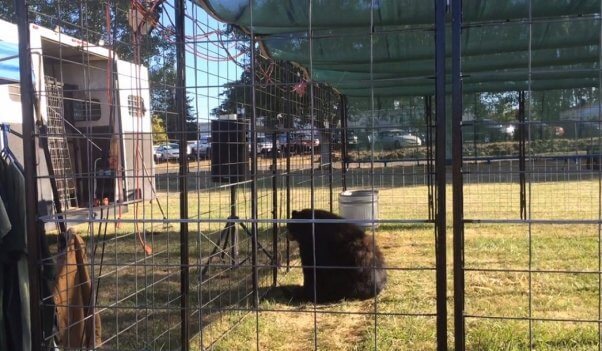 “This definitely-not-‘great’ bear show is simply a display of suffering, in which chained bears are cruelly yanked and prodded into posing for dangerous photo ops,” says PETA Foundation Director of Captive Animal Law Enforcement Brittany Peet. “PETA is calling on the authorities to hold this exhibitor accountable for tormenting this bear in apparent violation of federal law.”

The Great Bear Show has been repeatedly cited by the USDA for violations of the federal Animal Welfare Act, including for failing to provide Cindi with species-appropriate enrichment, pools, and furnishings to allow her to exhibit natural types of behavior and to alleviate the stress causing her abnormal pacing.

PETA has rescued 67 bears over the past five years and arranged for their transport to reputable sanctuaries, where they’re given space to roam, have the opportunity to den, and are never forced to perform tricks.

Help Get The Great Bear Show Shut Down