For teaching his 9-year-old son and his son’s friends to kill for fun, an Alberta man is receiving PETA’s Bad Dad Award. Greg Sutley—in what may have been a shameless stunt to promote his hunting outfit—recently came under fire from international media for a video he posted online of his young son’s birthday party, where the boy used a high-powered rifle to shoot a bear, who had been lured into the area with a barrel of food, in the head. As the animal collapsed, bleeding onto the ground, the gathered children cheered and laughed over the bear’s death.

In a letter sent to Sutley notifying him that he will soon receive the “Bad Dad” certificate in the mail, PETA challenges his baited hunts, which are reminiscent of the one that killed Cecil the lion, as “cowardly” and points out that hunting desensitizes children to violence. 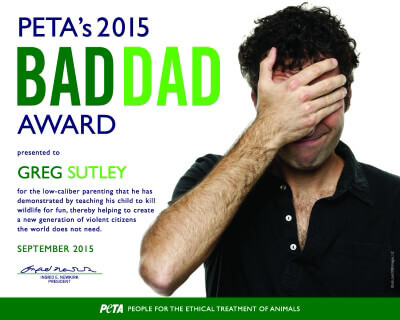 “When nearly every serial killer and school shooter got his start by killing animals, it seems grossly irresponsible to teach any child to relish in picking up a gun, aiming it at a living being, and opening fire,” says PETA President Ingrid Newkirk. “PETA’s ‘Bad Dad Award’ is a reminder that all parents must start making lessons in compassion a priority. Teaching children to shoot with a camera instead of a gun teaches them the valuable lesson of empathy.”