A lot of us can get pretty animated when we start talking about being vegetarian or vegan. Now, our plant-based persuasions are getting animated in a new series, Vegtoons. As its name suggests, Vegtoons is a Web-based animated series that educates viewers about the benefits of a plant-based diet. Here’s a clip from the first episode featuring the stars of the show—an unassuming manatee, a world-weary orangutan, and a pampered apologist pup. 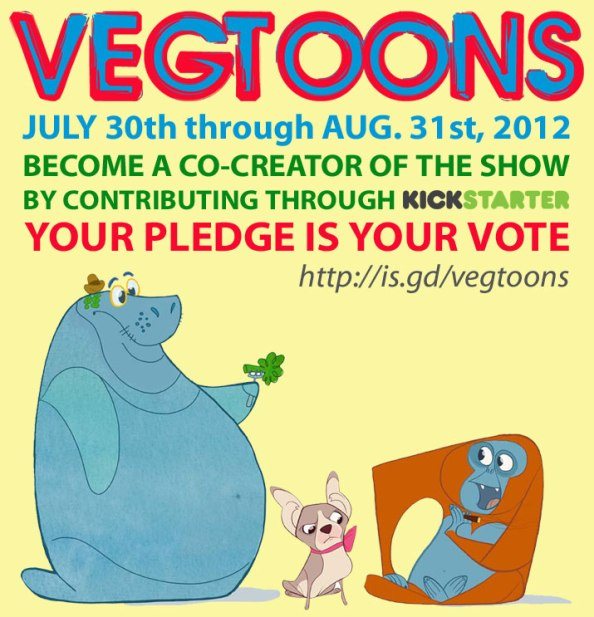 Vegtoons is the brainchild of vegan Greg Singer, who caught cartoon fever while working for DreamWorks Feature Animation, Fox Feature Animation, and Cartoon Network. To bring his vision to life, he enlisted the help of his friends, the vegetarian founders of Cartoon Saloon, the animation studio behind the Oscar-nominated feature The Secret of Kells.

In order to get the fledgling project off the ground and onto the Internet, he set up a Kickstarter fundraising page and—get this—is asking vegetarians and vegans to spare just $1. If 16,000 of us do so, he’ll be able to make the inaugural episode of Vegtoons a reality and propel the series onto computer screens around the world, spreading the vegetarian message along the way.

As Greg explains on the show’s Kickstarter page, “Your pledge is your vote. By the simple act of supporting the show, you are contributing to a global future based on compassion, sustainability, and justice.” And everyone who contributes to the show gets backer-exclusive e-mail updates and will be entered to win prizes.

To become a backer and help vegucate the planet, please visit the Vegtoons Kickstarter page.