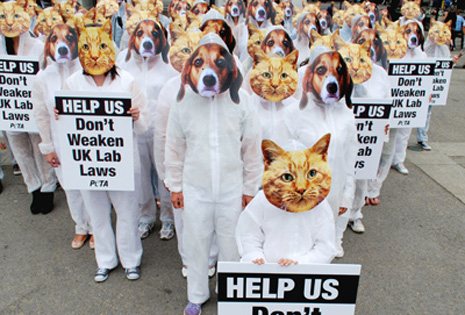 Looks pretty good, doesn’t it? Almost 100 PETA U.K. supporters took part in an eye-catching photo opportunity in London Saturday to demand that the government not adopt lower standards of protection for animals in laboratories when it incorporates the E.U.’s new directive regulating animal experiments later this year. If the government adopts the directive without changes, all animals will be affected. But dogs and cats in particular would become far more likely to be used in experiments because they would lose the special protections that Britain has given them for more than 25 years. 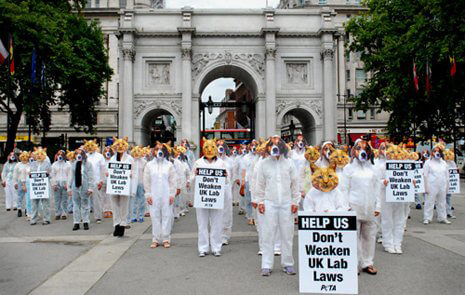 “Britons don’t want more cats and dogs experimented on or more suffering for the millions of other animals used in laboratories. They want fewer animals used and less pain,” said PETA U.K. policy adviser Alistair Currie. “We are calling on the public to send a clear message to the government that the citizens will not accept the laws that protect British animals to fall to the level of the EU’s lowest common denominator.”

A big thanks to all the fantastic PETA U.K. supporters who sent that message loud and clear.