The nation’s fleeting attention was caught today by a story about a Florida woman who was surprised to discover a full-sized alligator nonchalantly wandering around in her kitchen looking for treats. For her troubles, the woman in question—Ms. Sandie Frosti—gets an all-expenses-paid trip to New York to do the talk-show circuit, so everything turned out OK for her.

But what’s to become of old Andy the Alligator? Well, according to local authorities, our reptilian friend, who is believed to be a grown-up from a group of baby gators that the neighbors used to feed in the pond, has been bound up and is awaiting slaughter, which will probably come via a knife or ax to the spine, so that he can be paralyzed before they skin him alive to make shoes, belts, and bags out of him.

Which is pretty much the price that animals who don’t pass the “cute and cuddly” test always tend to pay in these situations. There’s going to be plenty of yukking it up about Ms. Frosti’s wacky experience during the talk-show fluff pieces tomorrow morning, so I figured at least somebody should tell the alligator’s side of the story. If nothing else, maybe it’ll at least serve as a reminder never to buy exotic skins. 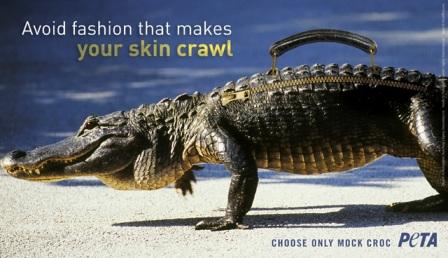