In early February, after we were alerted to the fact that Will Ferrell’s latest movie, Semi-Pro, was to feature scenes in which Will (or, more likely, a stunt double) wrestled a live bear, PETA sent a letter to his agents letting them know about the very real cruelty that goes on behind the scenes any time an “animal actor” is trawled out for a stunt in a movie. The disturbing news that the very same bear who was used in the movie attacked and killed his trainer yesterday has put the whole thing in a new light.

It’s pretty rare that people catch a glimpse of the way the animals they see in TV shows or movies are really treated (as you might imagine, they’re not natural actors — they’re often beaten to perform). But we’re hoping that this incident, sad as it is, will encourage Hollywood actors to take a stand against performing with animals, who want to be movie stars about as much as they want to be stuck in a cage for the rest of their lives (which is pretty much the standard accommodation for a great many of the animals who are used by Hollywood). The only really surprising thing about yesterday’s tragic bear attack is that it didn’t happen sooner.

We’re asking Will Ferrell to pledge never to act with wild animals again. I’ll let you know if he gets back to us. In the meantime, you can read our letter here. 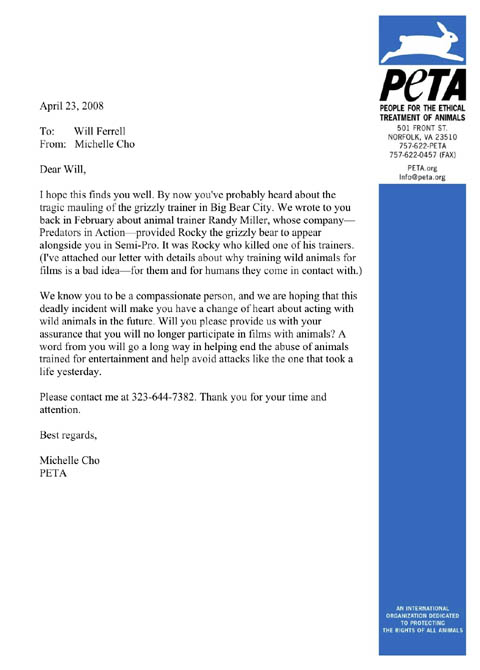