Air France-KLM CEO Alexandre de Juniac planned to give a nice, convincing speech and win over some potential investors at the J.P. Morgan Aviation, Transportation & Industrials Conference in New York. But PETA had other plans.

Air France is one of only two major airlines in the world that still ships thousands of monkeys from Africa and Asia to laboratories in the U.S. and EU, where they are caged, cut into, poisoned, and killed. Potential investors need to know what their money will be supporting—so PETA made sure they found out.

A PETA supporter was able to get into the meeting room, wait quietly, and as de Juniac started his speech, she jumped onstage, took over his microphone, and spoke until they cut the power. Even after the mic was turned off, she pressed on, telling the room:

“Air France is a bad investment. Air France is one of just two major airlines still shipping thousands of monkeys from Asia and Africa to laboratories, where they are cut into, crippled, infected with diseases, force-fed chemicals, and killed in horrible experiments. Compassionate people are actively protesting Air France at offices and airports around the world, and people everywhere are refusing to fly Air France until they stop sending monkeys to their deaths in labs. Air France has blood on its hands! Shame on Air France! Ban monkey shipments, Air France!”

Watch PETA’s protester in action as de Juniac puts his hands on his head:

You can help: Tell Air France to deplane monkeys. 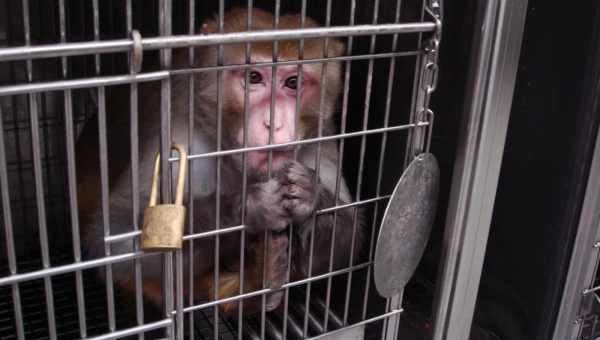