Ding-dong, the wicked bill is dead—almost. A New York Senate bill—which, like similar bills in other states, aims to criminalize filming on farms—is dying on the vine because no one across the aisle on the Assembly side will cosponsor it.

The good news comes after PETA Senior Vice President Dan Mathews spoke at a news conference about the bill in Albany on Tuesday—just days after the bill was moved forward by the state’s Ag committee. Joining him was New York Sen. Tony Avella, one of the lone members of the Ag committee to give the bill a thumbs-down. “Lawmakers and the public need to know how PETA works hand in hand with law enforcement on these cases,” Avella said. 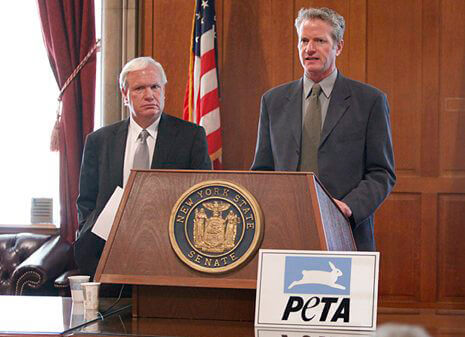 Making the case for the necessity of such investigations, Dan pointed out that a PETA investigation at a New York foie gras farm revealed horrors such as ill ducks who were unable to move  being eaten alive by rats, female hatchlings being drowned in feed sacks, and one duck with a neck injury so severe that water poured out of the wound when he drank.

While an “Ag Gag” bill in Florida is already history, similar bills are unfortunately still alive in Iowa and Minnesota. You can help by e-mailing the governors of both states and expressing your disgust at any law that protects animal abusers.