Yesterday, as fans of both teams gathered for parties and tailgating, alliances were formed and houses were divided. The excitement and tension were palpable. And of course, the Super Bowl was going on, too.

Who would claim victory in Puppy Bowl XIV, Team Ruff or Team Fluff?

Two pups rescued by PETA’s Community Animal Project and taken to the Virginia Beach SPCA took part in the big game: Bear and Macchiato, playing for Team Fluff and Team Ruff, respectively. Our offices were transformed into a sea of green and yellow. Debates were heated. Rivalries were fierce. 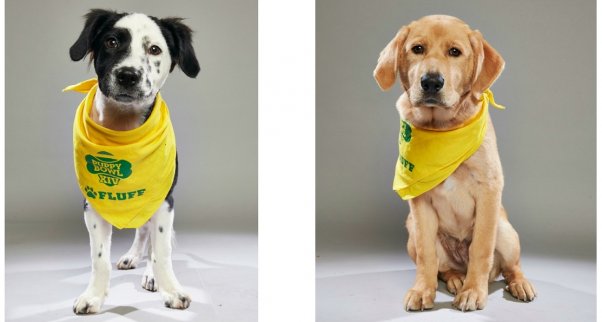 On the field, the competition was fiercely cute and both teams had an impressive showing. Ruff exhibited a solid running game, scoring several long touchdowns, but Fluff consistently responded. Neither team’s defense met the challenge, fueling rumors about the defensive coordinators’ futures with the league. The competitors traded the lead in an action-packed fourth quarter, but a final Fluff touchdown in the last 30 seconds of play clinched the victory, with a final score of 52 to 47.

Someone let a gazelle into the Puppy Bowl pic.twitter.com/B236p4T7sr

And for Bear, Puppy Bowl XIV was a true Cinderella story. After scoring two touchdowns and making what Bleacher Report called “a highlight-reel leap,” this formerly homeless dog locked up the coveted MVP title.

Of course, the Puppy Bowl players, who represented shelters across the country, were much more interested in scoring homes and families than trophies and endorsement deals. And every dog who played in the big game won a super new family, making them all the day’s big winners.

If you’re ready to give an animal the lifelong care and attention that he or she deserves, win a victory for animals by heading to your local shelter, where you’re sure to find your very own MVP.