On the anniversary of 9/11, we’re filing through our memories of that time: the chaos, the fear, the sorrow, the lives lost—and amid it all, people helping others, including animals. Among those who died in the attacks were several PETA supporters, including a PETA member who was on one of the hijacked planes. Their kindness is sorely missed.

When animals need us, PETA jumps in to help, and 9/11 was no exception.

Following the attacks, countless New York City residents were desperate to retrieve animals who were left behind in apartments and undoubtedly suffering from dehydration, hunger, smoke inhalation, or worse. Countless animals lost their guardians in the attack and waited for loved ones who would never come home. PETA received dozens of calls of concern.

No one could enter the extensive cordoned-off area surrounding Ground Zero, for fear of structural damage that could make the buildings unstable, and no one—including residents who had been at work when the planes hit—could get into the “red zone,” where thousands of dogs, cats, and other animals were trapped inside apartment buildings. 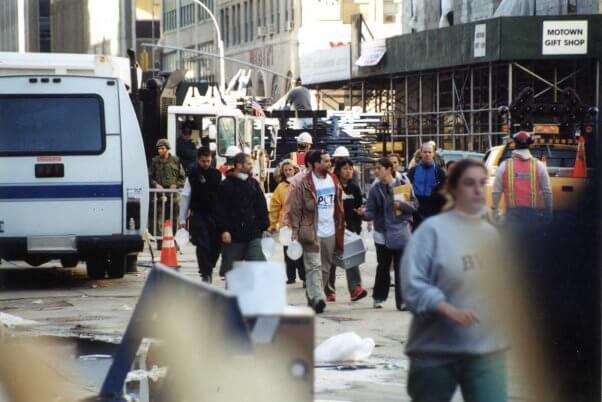 We did everything we could think to do. A special PETA rescue team in New York helped to reunite some animals with their families. We plastered the area with “Wanted” posters in order to gather information on animals whose guardians were missing.

Golden Girls star, New York City resident, and cherished PETA friend Rue McClanahan helped us by making a special appeal to building superintendents to listen for sounds from animals behind locked apartment doors. “The dearly beloved animal family members of those who died must not become another part of the casualty toll,” Rue said, persuading some superintendents to attend to stranded dogs’ needs and at least one to get a dog out.

PETA’s rescue team remained a constant on the “red zone” periphery, delivering food to animals left on the dust-covered streets and even rescuing hundreds of turtles who had been left outside a store.

We’re thinking of all those who lost their lives on September 11, 2001, and we commemorate every responder who risked their own safety to help.

Catastrophe struck without warning on September 11, 2001. While we may not be able to prevent disasters, we can do our best to ensure that we’re prepared for them. It’s crucial to make emergency plans for everyone in the family—including animal companions—before the next emergency.

Planning ahead can include keeping a list of places where you can stay with your animals during an evacuation, such as friends’ homes, hotels, and campgrounds; keeping a disaster kit ready for each animal, including carriers and leashes, water and food bowls, enough food and medication for a week, and a favorite toy or blanket; having your animals microchipped and putting secure, legible ID tags on them; and making sure their rabies vaccinations are current and carrying documentation of this with you. When disaster strikes, the most vital thing we can do for our animal companions is take them with us when we evacuate.

PETA has come to the rescue of innumerable animals endangered by disasters since our work outside the 9/11 New York City Exposure Zone, including those affected by the Mexico City earthquake, the hurricane that hit Puerto Rico, floods in India, and the eruption of the Taal volcano. During hurricanes Katrina and Harvey, we scooped up stranded animals from rooftops, balconies, porches, and floating mattresses—our team even saved one terrified kitten precariously perched atop a lawn umbrella in a totally flooded yard.

The compassion and generosity of PETA members power this vital work and provide our teams with the critical resources that they need to help animals threatened by hurricanes, wildfires, and other deadly emergencies. Please make a special gift to PETA’s Animal Emergency Fund right now to help ensure that we’ll always be there when animals need us most: