Can we not even look at other sentient beings without trying to stick them in our mouths? The disturbing “cicada recipes” popping up on the internet are giving us the sneaking suspicion that some news outlets are run by orally fixated toddlers. Eating cicadas is for the birds—really. Birds eat them because they don’t have access to a nice bowl of grains and lentils topped with a light lemon sauce. 📣 Humans have no reason to eat cicadas (or any other animal, for that matter)! And right now, the eastern U.S. is buzzing about the impending cicada season.

Periodical cicadas spend 17 years underground before emerging, so here are a few things you may not remember about them from the last time a brood made an appearance: 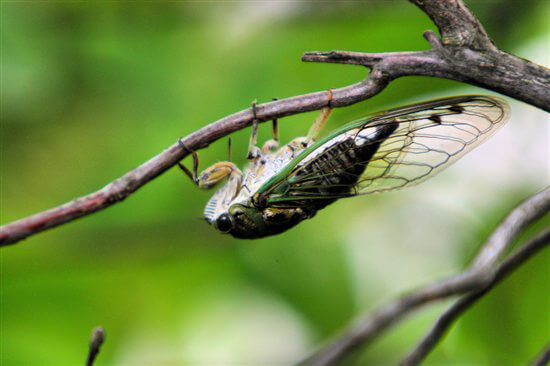 When cicadas burrow, they aerate the soil. Thanks, pals.

2. Although they use different sounds to relay different messages, cicadas are often humming to attract mates.

When you’re listening to that sweet summer sound, think of it as being like a Marvin Gaye song. 🎵Let’s get it on …🎵

Seventeen-year cicadas aren’t fans of vegetables or flowers—they prefer to get their leafy greens from trees. During the month that they live, they don’t typically harm trees, but if homeowners are worried, they can encase small trees in spun polyolefin.

Unlike the college kids down the street, cicadas play their music loudly only during the day.

5. According to ancient Chinese tradition, cicadas are powerful symbols of rebirth.

These cicadas mature underground for 17 years, only to enjoy a few weeks aboveground before they die, so it’s seriously messed up to rob them of the relatively tiny amount of life that they’re entitled to.

So just leave them in peace. Let them do their thing and live their cicada lives. And don’t even think about eating them.