In the giant melting pot that we call “home,” the fastest-growing segment of the U.S. population is people of Latin-American descent. We’ve seen how strongly this demographic has influenced American culture—including politics, food, and entertainment—and now it’s time to unleash that power to benefit animals.

There are more than 50 million Latinos in the United States today, and young Latinos make up nearly 25 percent of our country’s youth population—a growing group of technologically and culturally savvy individuals who are reshaping our nation and who care about animals,” says PETA Vice President Lisa Lange. “PETALatino.com addresses their desire to consume content that speaks to their complex cultural identity and will feature invaluable tips on how they can help animals, including healthy vegan recipes inspired by traditional favorites. 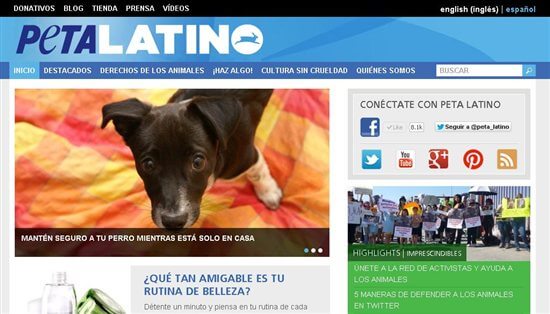 PETA Latino, a new outreach division, will provide all of PETA’s valuable resources in Spanish and English so that our Latino supporters can choose which language they prefer to receive information in, and no one will be denied the chance to speak up for animals because of a language barrier. PETALatino.com will also include delicious vegan recipes inspired by favorite traditional dishes, testimonials and ads by popular Latino stars, the new Spanish version of our hard-hitting meat-industry exposé “Glass Walls” (narrated by Mexican television personality Marco Antonio Regil), and much more.

And because Latinos can now receive alerts about demonstrations in their areas written in Spanish, the site will help bring English and Spanish speakers together for our common goal.

¡Vamos PETA Latino! And here’s to all the victories for animals to come!