Update: December 16, 2021
Massive win for primates! After many of the 22,000-plus PETA supporters in San Antonio objected, Texas Biomedical Research Institute, home of the notorious Southwest National Primate Research Center, withdrew its request for $11 million from the taxpayer-funded San Antonio bond program. Local PETA SOS hub organizer Mariah Smith testified at multiple public hearings, along with other PETA supporters. Our members, Texas Animal Freedom Fighters, and other concerned constituents submitted public comments and called their elected officials to tell the city to say NO to funding this notorious primate laboratory.

We need your help to prevent this outrageous proposal from being approved. 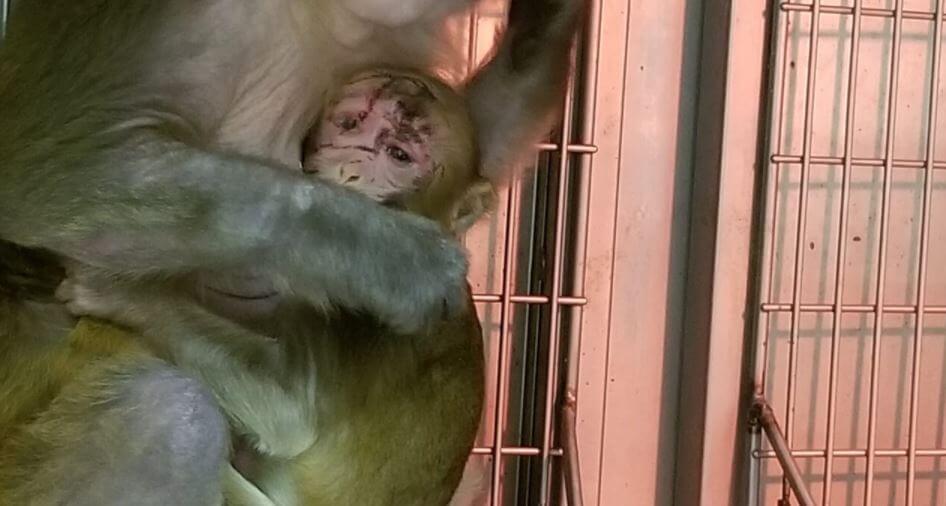 Today, the city’s bond committee will issue a prioritized list of projects for the city council and mayor to consider funding. The mayor needs to hear from you about why you don’t want your money used for cruel experiments on primates.

The SNPRC is one of the remaining seven “flagship primate centers” established and funded by the National Institutes of Health and is one of the largest primate laboratories in the world. Experimenters intentionally infect monkeys with pathogens such as HIV/SIV (simian immunodeficiency virus), tuberculosis, malaria, and Zika virus. Tens of thousands of primates have suffered and died in these experiments, yet we still don’t have effective vaccines for the infections.

Not only is the SNPRC really bad at science, in the last decade, the U.S. Department of Agriculture also fined Texas Biomed nearly $26,000 for repeatedly allowing primates to escape from cages and injure themselves and others, including humans. The fine didn’t stop its carelessness. In 2018, four baboons escaped. Multiple monkeys died by strangulation when they became entangled in a door cable. In February, 159 baboons suffered from painful frostbite so severe that their fingers, toes, or tails had to be amputated. The SNPRC can’t even keep monkeys safe, so it’s no wonder that it hasn’t been able to deliver on the promised vaccines.

Texas Biomed, which runs this monkey prison, is attempting to fool the city of San Antonio about its ability to produce treatments and cures for humans. The mayor needs to learn the truth and see that his constituents do not support the bond as currently proposed.

Please make it clear to San Antonio Mayor Ron Nirenberg that you will not support the bond program when it comes up for a vote if it includes this handout to monkey tormentors.

Feel free to use these talking points: