Update: December 1, 2021
Victory! Following a campaign by grassroots activists and PETA, RUDSAK has pledged to end its production and purchase of all fur by the end of 2022. This is a huge win for coyotes, foxes, rabbits, and other animals killed for their fur.

Compassionate people like you won this victory for animals. Now, please take a moment to urge Canadian retailer True Outliers to stop selling parkas lined with the fur of foxes and minks!

Update: November 11, 2021
RUDSAK has announced a new policy indicating that it will discontinue purchasing “natural fur” and stop producing items using it by the end of 2022—but the policy doesn’t outright ban the sale of fur. This may conveniently allow the company to continue selling “reclaimed” or “recycled” fur—which is often just excess unused fur and is still a product of cruel actions by fur farmers and trappers—while presenting itself to consumers as a more “ethical” brand.

RUDSAK is an outerwear brand that claims that it’s committed to “promoting innovation” and “deliver[ing] excellence in product design.” Yet it continues to sell fur, an archaic and wholly unnecessary material that’s stripped from animals who were violently killed. 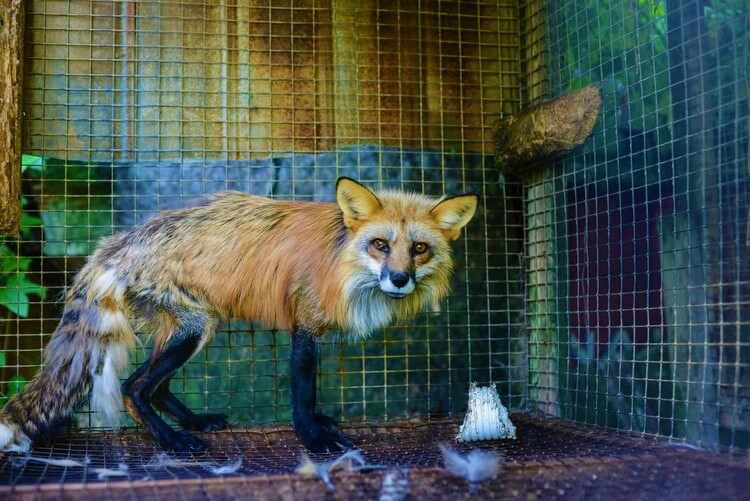 Before their fur is stitched into RUDSAK’s clothing, foxes, rabbits, and other animals may spend their entire lives confined to filthy cages before finally being beaten, electrocuted, gassed, or skinned alive. And coyotes who are trapped in nature can suffer for days from blood loss and infection—without shelter from freezing temperatures—before the trapper returns to bludgeon, shoot, or kill them in some other horrific way.

All animals deserve equal consideration. They can experience pain, suffering, joy, and fear, just as we can, even though they may look different from us. Foxes and coyotes—both members of the dog family (Canidae)—are loyal animals who form strong bonds with their mates and raise their babies communally. But RUDSAK continues to treat them as if they were nothing more than coat trim.