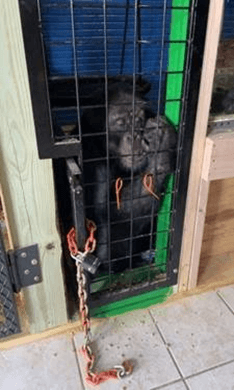 Tonka in his captor’s basement. 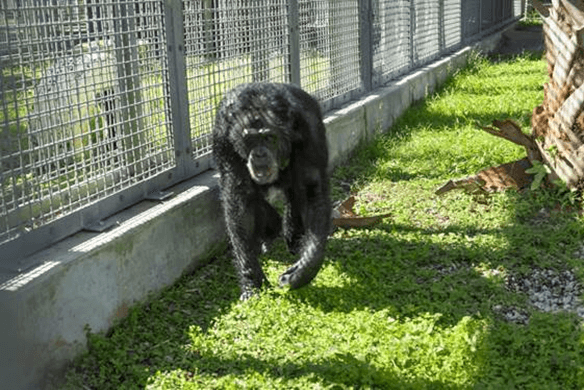 Tonka in a temporary enclosure at Save the Chimps.

That Hollywood ending nearly didn’t happen. When PETA first tried to carry out a court order rescue Tonka and six other chimpanzees from the Missouri Primate Foundation, his former owner, Tonia Haddix, falsely claimed that he had died and that her husband had burned the animal’s body to ashes. But PETA wasn’t buying it. After PETA and Cumming offered a joint $20,000 reward for information, a phone call recording came to light in which Haddix admitted that Tonka was still alive—and that she planned to “euthanize” him. PETA rushed to court, obtained an emergency order to prevent his death, and arranged for 24/7 surveillance to ensure that he wasn’t moved again. Tonka was evaluated by expert veterinarians, who found not only that he wasn’t suffering from “congestive heart failure” as Haddix had claimed but also that she was apparently giving him massive doses of drugs that he didn’t need.

PETA arranged to transport Tonka to Save the Chimps, a Global Federation of Animal Sanctuaries–accredited great-ape rehabilitation facility. After enduring months in a cramped basement cage, Tonka now embraces every opportunity to climb to the top of his spacious enclosure, interact with his chimpanzee neighbors, and spend as much time as he can outdoors—even when it starts to rain.

PETA—whose motto reads, in part, that “animals are not ours to use for entertainment or abuse in any other way”—opposes speciesism, a human-supremacist worldview. For more information about PETA’s investigative newsgathering and reporting, please visit PETA.org or follow the group on Twitter, Facebook, or Instagram.