Winston-Salem, N.C. – In memory of the cows who were killed when a truck carrying them crashed on I-40 near Thomasville Road on February 18, PETA has placed a billboard near the crash site that proclaims, “See the Individual. Go Vegan“—despite Lamar Advertising’s refusal to consider the ad. 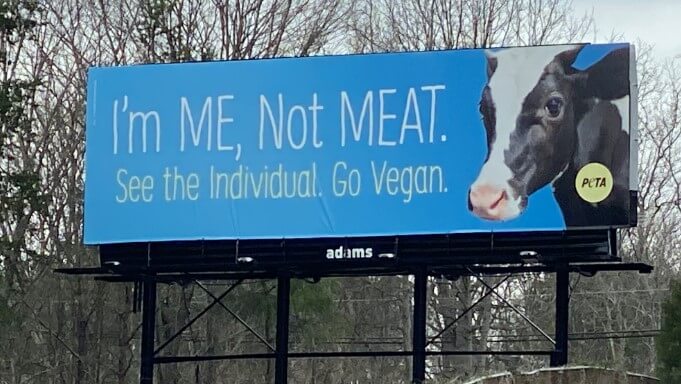 “From deadly truck crashes to a global pandemic that originated in a meat market, the dangers associated with eating animals are all over the news,” says PETA Director of Campaigns Danielle Katz. “PETA’s message for the drivers still on the road is that we can all eat delicious vegan food and save the lives of humans and cows alike.”

Cows in the meat industry are often confined to cramped, filthy feedlots without protection from the elements. Calves are castrated and branded without pain relief. At the slaughterhouse, workers shoot cows in the head with a captive-bolt gun, hang them up by one leg, and cut their throat—often while they’re still conscious and able to feel pain. In addition, each person who goes vegan saves the lives of nearly 200 animals every year.

COVID-19 originated in a “wet market”—one where live and dead animals are sold for human consumption. Health authorities confirm that influenza viruses and coronaviruses are zoonotic (transmissible from other animals to humans)—and farms and markets crammed full of stressed animals are breeding grounds for such deadly maladies. Previous influenza viruses have originated in chickens and pigs.

The billboard is located on the John Gold Memorial Expressway, near Exit 107A, a two-minute drive from the crash site.