Washington – As part of its effort to urge President Joe Biden to appoint a visionary leader to the helm of the National Institutes of Health (NIH), PETA has placed a full-page ad in today’s Washington Times emphasizing the need for a director who will stop squandering tens of millions of taxpayer dollars each year on irrelevant, curiosity-driven animal experiments that have failed to produce cures or treatments for the American public—and will instead embrace modern, non-animal research methods to bring the failing agency into the 21st century. 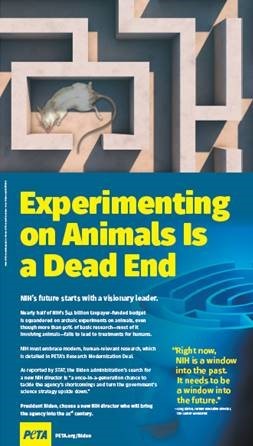 The group is calling on NIH to adopt the Research Modernization Deal, developed by PETA scientists, which outlines the overwhelming failure of animal experiments to lead to treatments or vaccines for HIV, strokes, Alzheimer’s disease, Parkinson’s disease, and a host of other ailments. It provides a strategy for phasing out the use of animals and implementing high-tech, cutting-edge, animal-free methods that are more likely to yield results relevant to humans.

“NIH’s disastrous record of futile and expensive animal experiments has not only harmed animals but also put our country at risk of falling behind other nations,” says PETA neuroscientist Dr. Emily Trunnell. “PETA is urging President Biden to nominate a leader committed to learning from past mistakes and prioritizing superior, modern, human-relevant research.”

Under the misguided leadership of its previous director Francis Collins, who resigned in December, NIH squandered nearly half its annual budget on animal experiments—$21.1 billion in 2021—even though 95% of new drugs that test safe and effective in animal tests fail in human clinical trials and 90% of basic research, most of it involving animals, fails to lead to treatment for humans.

PETA has previously sent supporters dressed as dinosaurs to tail Biden at major events in order to remind him that appointing another NIH “dinosaur” director would cause the U.S. to fall behind the rest of the world in biomedical research.