New Bedford, Mass. – Featuring a “talking fish” with an unmistakable Massachusetts accent, a new PETA appeal—plastered on buses in the home of the nation’s top-earning commercial port—urges everyone to treat fish with kindness this “summah” by giving crispy fishless fillets and other fish-free fare a try. 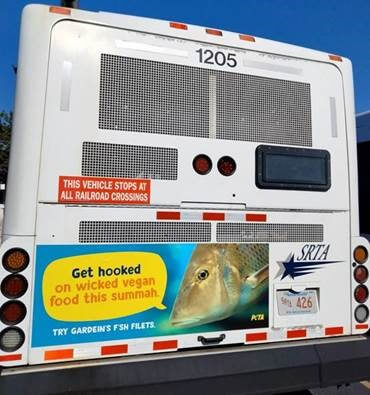 “Fish aren’t swimming potatoes—they really do talk, using squeaks, squeals, and other low-frequency sounds to communicate with their friends and family members,” says PETA President Ingrid Newkirk. “PETA’s message is that intelligent life forms who swim alongside the Port of New Bedford are Bay Staters, too, so let’s show them kindness by eating vegan foods.”

More fish are killed for food each year than all other animals combined. They slowly suffocate or are crushed to death when they’re yanked out of the oceans in huge nets, and the stomachs of those who survive are cut open on the decks of fishing boats while they’re still alive. Every person who goes vegan saves the lives of nearly 200 aquatic animals and other sentient beings each year.

The messages will run on the rear panels of 10 local buses for one month.