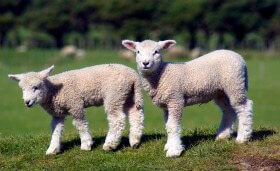 What is veganism? According to Wikipedia, veganism is “the personal practice of eliminating the use of non-human animal products,” and it’s definitely spreading. For instance, vegan meat alternatives can be found in most grocery stores. Many restaurants—and ballparks!—are serving veggie burgers and veggie dogs. Mainstream bookstores like Barnes & Noble usually have a robust vegetarian/vegan cookbook section at each location. Even Oprah’s been buzzing about veganism! And yet, despite all the hype, there’s still some confusion on the subject.

Veganism isn’t about personal purity. Although veganism is about trying to cause the least amount of suffering possible, we can’t always be perfect. Before going vegan, I felt scared that I would “mess up,” that I would accidentally eat something with a small amount of “animal something” in it, and that I would be a failure as a vegan. But that’s not the case. As a consumer, I do read labels, and I do make sure that there isn’t any meat, milk, or eggs in anything that I buy. But I’m not going to refrain from purchasing a box of cereal because there’s a tiny amount of monoglycerides in the ingredient list that may or may not be animal-derived! Basically, I try not to sweat the super small stuff.

“Cruelty-free” doesn’t mean “vegan.” These two terms are not synonymous, and this confused me at first. For instance, I purchased a lip balm that said it was cruelty-free, but later, when I looked at the label, I saw that honey was listed as an ingredient! I had to research a little bit in order to learn that when a product says it’s “cruelty-free,” this means that animal testing wasn’t used to produce it. However, the product may or may not contain animal byproducts, and if it doesn’t explicitly say “vegan” or “no animal ingredients,” I’ll still want to check the list of ingredients to be sure.

Many foods you love are already vegan. When I initially went vegan, I thought I’d have to give up all the things I love. But there are so many products that are accidentally vegan that I can still eat many of my favorite foods! Products like Frosted Flakes, Original SunChips, and Peanut Butter Nature Valley Crunchy Granola Bars are all frequently in my pantry. And what’s more, I’ve discovered new things to love! For instance, Gorilla Munch is yet another breakfast must-have that keeps me in touch with my youthful side.

People say that we learn something new every day. When I went vegan, there was a little bit of a learning curve in the beginning, but, overall, I discovered that veganism isn’t a difficult concept, nor is it difficult to practice. I do need to be a conscientious shopper and pay attention to labels (which is something we all should do, regardless) but I can still eat many of the things I love or versions of them. And I don’t need to stress about being 100 percent perfect all the time. This lifestyle choice—choosing compassion—makes me feel good about the products I put in or on my body, and since making the change, I’ve never looked back.

What did you learn when you went vegan?