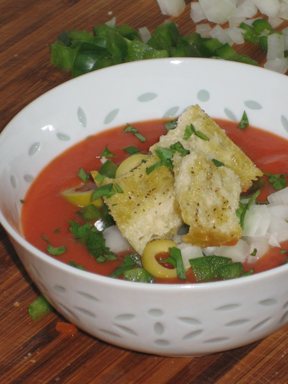 When it’s hot outside, it’s hard to think about eating anything warm. Most summer days, I feel like I’m being smothered by the heat and humidity, so the last thing I want to do is increase my body temperature with warm food. On hot nights, cold salads and soups make the perfect meal. Luckily, my mother’s garden is full of tomatoes, cucumbers, bell peppers, and basil—key ingredients in most gazpacho recipes. I say “luckily” because I am not gifted with a green thumb. I don’t think I will ever be able to grow my own garden, and I base this on the fact that I’ve accidentally killed every plant I’ve ever had. So I take advantage of my mom’s garden and do a little “shopping” there when I can.

Gazpacho is one of the most well-known chilled soups. Most people are familiar with this classic red soup with a thin broth and minced veggies, but I desired something with more body and a slightly different flavor profile. After some research, I stumbled upon Spanish Andalusian gazpacho. Bread is added to the broth, which is then puréed, making it thicker. The result is a soup that is rich and creamy without being overpowering.

What also makes Andalusian gazpacho stand apart is that instead of having the chopped vegetables already mixed in, the diner adds them to taste. That means I can get as crazy as I want. I love to load my soup up with lots of veggies and olives, while my boyfriend piles the croutons high and adds hot sauce.

The best part of gazpacho is that it keeps for days and gets more flavorful the longer it sits. So make a big batch and you’ll have lunch for the week.

*Note: To peel the tomatoes, place in boiling water for 1 minute. Remove and carefully cut an “x” into the skin, then peel.