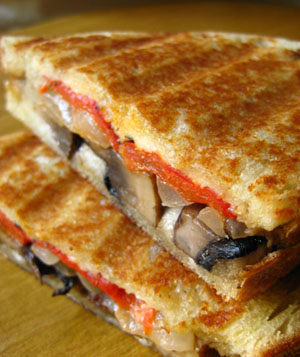 Many, myself included, think of panini as just a grilled sandwich with a golden to dark brown color and those perfect little lines across the bread. But grilling isn’t necessarily a panini requirement, and you can serve them minus the marks—but I don’t know why you’d want to do a thing like that. My favorite part of a panini is the crispy bread and the cute lines.

I also love being able to choose a variety of fillings that are forced to be pressed together into one compact little sandwich. After watching last week’s Top Chef and seeing that both teams made some sort of beef dish with a horseradish sauce, I decided I needed to play off those flavors to create my own (vegan) panini.

The meatiness of portobello mushrooms was naturally my first choice, and to add even more flavor I sautéed the strips in a dash of liquid smoke and olive oil. The creaminess—and kick!—of the horseradish sauce was the perfect complement to all the veggies.