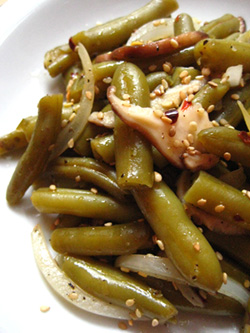 Green beans pack quite a nutritional punch. They are full of vitamin K, vitamin C, iron, and omega-3 fatty acids, for starters. And in addition to the health factor, they are also a very diverse ingredient. You can smother them in cream of mushroom soup to make the Southern classic green bean casserole, you can enjoy them just steamed and salted, or you can try them in a variety of Asian-inspired dishes.

This recipe is for the popular dish sesame green beans, but with a twist. I like to add in onions and shiitake mushrooms to give a little more variety to the flavors and textures. Enjoy!

•Steam the green beans for 2 to 3 minutes, or until just tender. Set aside.

•In a large skillet or frying pan, add the vegetable oil and bring to medium-high heat. Add the onion and cook for about 2 minutes. Add the mushrooms and cook for an additional minute.

•Season with salt and pepper.