Recipe for Success: These Businesses Went Vegan and Flourished

Folks who have made the switch to vegan eating have found massive amounts of personal success. Some lost weight, others noticed younger-looking or clearer skin, and all were gratified by knowing that they’re helping to save animals and the planet. Restaurants are finding similar success. But instead of clear skin, eateries that switch to vegan menus notice improved popularity. Plus, in addition to saving animals and the planet, these establishments are saving on food costs—and gaining sales.

17 restaurants out of 22, confirmed with cold hard cash that their sales increased dramatically. Some as much as 1000%. Whether you're for the animals or not, SBO's should take this intel seriously as a hint on how to keep your business alive! #veganizer https://t.co/7pmGZLt3Fn

According to Forbes, out of 22 restaurants surveyed that made the switch to 100 percent vegan menus, the 17 that responded reported increased sales—and some saw sales surge by as much as 1,000 percent. The eateries also reported an increase in social media followings—some as much as 15,000 percent. Many also saw a decrease in food costs. Click here to learn more about these now-vegan restaurants, and read on to discover a few of our favorite success stories:

If you find yourself in New Orleans, be sure to stop by the newly vegan Breads On Oak—one of the city’s top bakeries. After flirting with a mostly plant-based menu for some time, the popular eatery took to Instagram to announce, “Out with the Moo and in with the New! We are now completely #vegan,” much to customers’ delight:

Breads On Oak owners Sean and Chamain O’Mahony recently explained their decision in a statement, saying, “Going totally plant-based has always been our vision. … Our goal is to provide healthy food choices that show respect for our planet, and for the animals [who] inhabit it, therefore we use all organic, local sustainable plant-based products.”

The eatery is a great brunch spot—think pumpkin cheddar biscuits, yummy quiches, and sandwiches like the Happy Hen, which contains homemade garbanzo bean eggless salad, avocado, and Dijon mustard and is served on house-made artisan bread. Or if you’re short on time, pick up some of its delicious pastries, like Cinnamon Maple Walnut Rolls, Stuffed Brioche, or Irish Tea Biscuits.

When this restaurant opened in Dallas in 2015, it featured “vegan Thursdays.” But in 2016, a customer said it wasn’t an option to continue to support a business that continued to serve meat—so El Palote’s owners cut meat from the menu the following week. The Mexican restaurant is a family-owned business, and the father—who had a heart condition—went vegan for his health. The rest of the family quickly followed suit. The restaurant’s owners say that they didn’t put a “vegan” sign on the front door because they prefer to let the food speak for itself. According to Veganizer, El Palote’s gross sales increased by 371 percent, while the eatery’s social media fame jumped 7,500 percent. And it’s clear why—the food is “life changing.”

Trevor Evans worked in the mines in Australia for 20 years, but what he really wanted to do was help save animals. In 2004, he opened Secret Creek, and in 2016, the family-run business—which also serves as a popular wedding venue and cake supplier—switched to an all-vegan menu. Since then, the eatery has reported an increase of sales by 153 percent. As if that’s not astounding enough, its food costs also decreased by 58 percent.

In 2002, John McCormick and his wife, Vanessa Shanks, opened Café Moto—a chic, cycling-themed bar that featured a nonvegan menu. In 2016, when it came time to renegotiate their lease, they decided to start fresh with a new concept. “You think about how the future can be—how can you lessen your impact … and how can you create an environment where you feel good bringing your child to eat,” said Shanks. Thus, Bar Velo was born. The eatery—which now features a 100 percent plant-based menu—has seen a 15 percent increase in sales since making the compassionate switch.

Years after opening a gelatería in 2009, Gelato Blue in Newtown, Australia, opted to serve all-vegan gelato. “Because we are a family business, we treat our customers like family,” said the store’s manager, Fotini Platis. So in order to accommodate all their customers’ desires, the shop switched to serving only plant-based gelato as of 2016—on Easter Saturday, to be exact. Gelato Blue’s vegan menu was reportedly the third major plant-based menu to be launched on the same street within a span of six months, proving that the demand for compassionate eats is only rising.

When you think “French cuisine,” you may not immediately think “vegan.” But Christopher Caron and his mother, Yvette—owner and chef of Délice & Sarrasin in New York City—are changing that. After opening a 99 percent vegan restaurant in 2015, the mother-son duo made the full switch a year later—eliminating cheese from their menu. Since doing so, sales have gone up by 350 percent, while the bistro’s social media following skyrocketed 1,200 percent, and it’s easy to see why. Everything—from the “steak” tartare to the vegan brie cheese—at the French eatery is Instagram-worthy.

This coffee shop opened in London in 2012. In March 2017, after one employee went vegan, the eatery opted to start switching its menu. According to the establishment’s website, “We ‘ran out of ham’ for weeks before we decided to become more vocal about it. On Mother’s Day 2017 we stopped pouring cow’s milk into our espresso, signalling the end of animal products in our cafe.” Staff members also posted a notice explaining why they’d no longer be serving dairy “products.” Less than a month later, The Fields Beneath’s Instagram site jumped from 700 to 7,000 followers. According to Forbes, the eatery “also maintained a gross profit of 68% after turning vegan in March 2017.”

Australia’s first vegan Greek bakery didn’t start out vegan. But shortly after opening in 2016, the family-owned establishment decided that the best way to honor a late companion dog was to commit to baking with only plant-derived ingredients, including “[l]ove, care, consciousness and awareness.” The effort proved so successful that the family behind the plant-based vegan goods opened a second location—only two months after opening the original one!

When restaurateur Ravi DeRossi announced that he wanted to turn all his restaurants and bars in lower Manhattan and Brooklyn vegan in 2015, he started with Mother of Pearl. It clearly worked—sales increased and food costs dropped. The eatery—which had mainly seen crowds looking to order late-evening drinks—started to get a dinner rush for the first time. Switching to a vegan menu proved to be so successful that DeRossi even closed Bourgeois Pig—a fondue restaurant—and reopened the space as Ladybird, a vegan tapas bar.

Medical doctor Amit Tewari wants “to reduce the costs of vegan food and make it more accessible to the broader population.” That’s why, in December 2015, he turned his Sydney eatery—Soul Burger—completely vegan. Since doing so, sales have increased 347 percent, while food costs have decreased by 3 percent. Tewari has also opened three more locations throughout Sydney. PETA Australia even featured the eatery for its comedic “Breatharian menu.” The burger joint’s social media following also rose by 233 percent. Follow it on Instagram to see why:

The weekend is nearly over, BUT it’s also nearly Magic Monday! Which means $10 burgs from 11am -4pm across all of our stores tomorrow!

Situated in New York City’s East Village, The Organic Grill was a vegetarian restaurant for 18 years. It slowly began removing eggs and dairy “products” from its menu a few months back. Then one day, it made it official—it announced on Instagram that it’s finally and officially an all-vegan restaurant. The new animal-free menu seems to be well accepted by customers, and it’s easy to see why. Offerings include the Tofu Omelet, the Cauliflower Parm Sandwich, pierogies, and some of the best vegan burgers in the city.

After testing a vegan menu for only a few weeks, Washington, D.C., eatery Pow Pow never looked back. “PLANT-BASED stays!” it announced. Menu items include the Disco Stick Egg Roll, Trolley Fries, and a Natalie Porkman Bowl made with sweet-and-sour seitan pork. Patrons seem to love the new all-vegan menu. “Support has been so great that we couldn’t imagine going back,” said Pow Pow cofounder Shuan Sharkey.

This all-vegan Chinese restaurant located in Chino, California, has never served animal-derived foods—but its owners used to offer them in other restaurants. After a serious accident resulted in years of ill health and doctor’s appointments for House of Fortune’s business consultant, she decided to go vegan when she saw a PETA video exposing cruelty to animals in the food industry. Within months of going vegan, she found that her long-term symptoms had all but disappeared. Inspired, she successfully persuaded many of her friends, a few of her former doctors, and even some of her clients to ditch animal “products” in their restaurants and their personal lives, too. Though they had run Chinese restaurants that served meat, eggs, and dairy in the past, the owners of House of Fortune decided to open this all-vegan restaurant to reflect their new compassionate lifestyle. House of Fortune has been thriving in Chino, serving up great vegan Chinese dishes like those shown below: 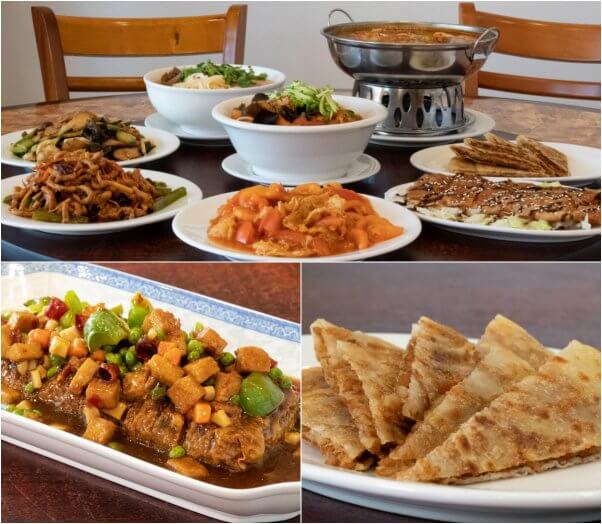 Los Angelenos may be surprised to learn that the all-vegan Cruzer Pizza in the Los Feliz neighborhood used to serve meat and dairy. As it became clear over time that the pizzeria’s animal-free options were its most popular ones, it gradually evolved into the well-loved, fully vegan establishment that it is today. In addition to pizza, Cruzer serves tempting appetizers—such as potato skins and Daiya-stuffed breadsticks—hearty salads, filling pasta dishes, an array of mind-blowing sandwiches, and indulgent desserts including tiramisu and chocolate lava cake.

When Holiday—formerly Roman Candle Baking Co.—closed for remodeling in April 2018, it actually meant menu remodeling. It reopened later that month, offering only plant-based (and gluten-free!) goodness. This was huge, considering that the eatery had been famous for its pizzas and “meaty” hoagies. But after Duane Sorenson—who owns Holiday and founded Stumptown Coffee—went vegan, he decided that his Portland-based hot spot should be vegan, too. The fancy toast options are to die for (cashew, cardamom, and pear with a walnut crumble … seriously?) as are the fresh juices, smoothies, and coffee selections.

We must admit—we’re not at all surprised by these success stories. Vegan lifestyles are on the rise. Consumers are becoming more and more aware of the benefits of not eating animals, and restaurants are responding in kind.

Have you joined the vegan revolution?

Going vegan is easier than ever before and—as these restaurants prove—a recipe for success. Click here to receive a free vegan starter kit packed full of recipes, tips on eating out, and important health information. Going vegan may be easier than ever before, but we’re here to make it even easier. If you’re a restaurant owner and want information or tips on switching to a vegan menu, click here to contact PETA today!