The Vegan Beer & Food Festival just rocked Portland, Oregon, and Los Angeles’ event is coming up this weekend. More than 80 breweries and more than 70 food vendors will be there serving vegan goodies, so we can’t contain our excitement.

Here’s a list of just some of the reasons to be there (or have major FOMO) on Saturday:

1. Charlie’s Brownies represents the fest with this beautiful blondie.

2. Where else are you going to get this pizza, a collaboration between The Herbivorous Butcher and 800 Degrees?

3. As if that weren’t enough, The Herbivorous Butcher served this masterpiece in Portland: vegan chicken and mashed potatoes in a waffle bowl!

4. Tears of joy for this sammie, packed with plant-based chicken, garlic pepper Havarti, bacon, lettuce, tomato, onion, and ranch dressing. Like, how is this even real?

5. When Plant Food + Wine is on board, we’re definitely in. Word on the street is that it’s bringing tacos. YES!

6. This piece of vegan junk-food heaven is coming all the way from Las Vegas to be there. Yes, that burger bun is actually a vegan doughnut.

7. Our friends at Mohawk Bend will be there, and we’re hoping they bring one of their divine vegan pizzas.

8. This thing that’s way better than a Big Mac:

9. Everyone should cool off with some vegan frozen yogurt.

10. These jackfruit nachos by Upton’s Naturals are swoon-worthy.

12. Will little pine bring these cookies? A vegan grilled cheese, perhaps? Does it really matter when 100 percent of the proceeds go to help animals? No matter what the restaurant offers, we know it’s going to be out of this world.

13. Our favorite vegan taco truck will be in attendance.

14. Southern Fried Vegan will dish you up some mac ‘n’ cheese, collard greens, and barbecued “chicken.”

15. And our neighborhood vegan deli Organix will surprise us with delicious food.

18. Your fest won’t be complete without one of these Craft Micheladas, made with vegan (anchovy-free) Worcestershire sauce.

19. If falafel onion rings don’t excite you, we’re not sure what will.

20. And at the end of the day, there’s nothing better than cheersing vegan beer with your besties.

Ready to eat, drink, and be merry? Don’t forget to drink responsibly, and we’ll see you there! 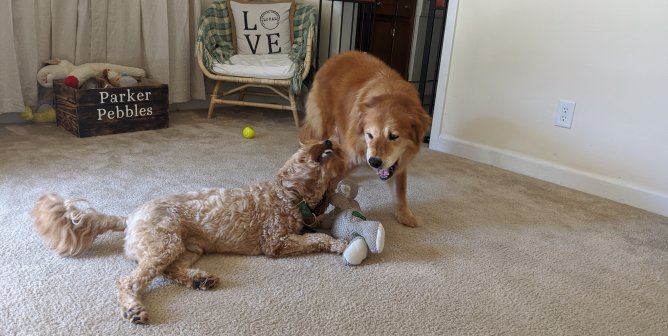 How to Keep Your Canine Companion Entertained Indoors