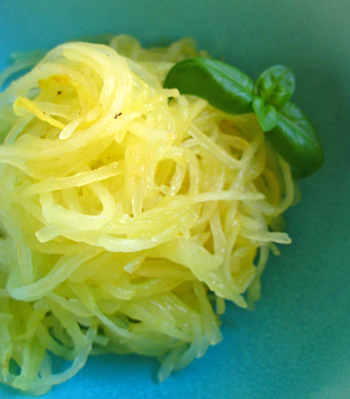 The low-carb craze that possessed our country a few years back caused many people to try anything and everything they could to replace carbs in a dish—while still trying to maintain flavor and satisfaction, of course. This led to many highly processed, and sometimes downright bizarre, carb-free foods. But one easy and healthy way to reduce carbs is by using spaghetti squash in place of spaghetti made from flour.

If cooked properly, the “noodles” of spaghetti squash are slightly firm and are great vehicles for many sauces—much like spaghetti made from flour. The key here is cooking the squash properly, though. It’s easy to overcook or to separate the noodles while too hot, both of which result in mushy squash.

The recipe below is for your basic roasted spaghetti squash, which you can then dress up with fresh herbs, a light tomato sauce, or even a pesto. My only recommendation is not to overdo it with the sauce. These noodles are a little more delicate than spaghetti and won’t hold up under anything too heavy.

•Preheat the oven to 375°F. Scoop out the center of the squash, including the seeds, and discard.

•Place the squash halves face up on a baking sheet, then drizzle the olive oil over the inside of the squash. Season liberally with salt and pepper.

•Place in the oven and cook for about 45 minutes, or until the squash pulls away from the sides easily. Remove from the oven and let cool for 15 minutes.

•Use a fork to scoop the strands of “spaghetti” from the squash and place in a medium bowl.

•Add additional seasonings or a sauce and serve.