How To Make The Best Vegan S’mores

Think that going vegan means you have to give up s’mores for life? Think again! On National S’mores Day, not only can vegans enjoy this sinful summer snack, they can choose from several options when it comes to how to make it and which products to use. Check out the following ideas: 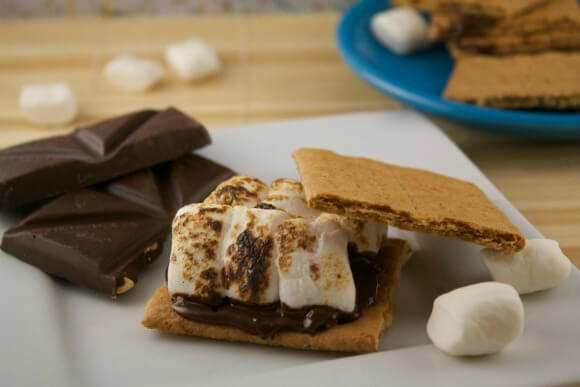 Being short on time this week, I went with option number five. Dandies are my favorite vegan marshmallow, and in my opinion, they taste almost exactly like classic mallows—if not better! I picked mine up at the local health-food store (although they’re also sold at some Whole Foods Markets locations and on Amazon.com) and used Nabisco Grahams Original graham crackers from a regular grocery store. As for vegan chocolate, most health-food stores carry a variety of nondairy chocolate bars. I opted for an almond dark chocolate bar, which gave my sammiches a hint of nutty flavor.

For each s’mores sandwich, I toasted three mini mallows at a time on the stove, and then placed two rows (six mini mallows total) on a graham cracker. I dropped one square of chocolate on the other graham cracker and popped that in the microwave for 15 seconds at a time, until the chocolate was melted and soft to the touch. I slapped the two crackers together, and voilà! Vegan s’mores in a pinch.