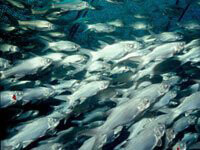 Consumption of fish and other sea animals is the sole source of human exposure to methyl mercury.

Around the world, fish are accumulating toxic mercury in their flesh as a result of industrial pollution. Fish absorb and ingest the mercury and store it in their tissues. If you eat fish, your body will absorb mercury from the fish’s flesh, and the accumulation of this toxin can lead to serious health problems. It is worth noting that fish consumption is the sole source of human exposure to this known poison.

Eating even small amounts of fish flesh can have a big impact on the levels of mercury in our blood. A study by the Environmental Protection Agency (EPA) revealed that women who ate fish just twice a week had blood mercury concentrations seven times higher than women who hadn’t eaten fish in the previous month. Studies have also shown that a 140-pound woman will be 30 percent over the EPA cutoff for safe mercury levels if she eats just one 6-ounce can of white tuna each week.

Mercury Is a Poison

Mercury is known to cause severe health problems for humans, including personality change, tremors, spontaneous abortion, and damage to a developing fetus. Mercury poisoning from eating fish can also cause fatigue and memory loss, which some doctors call “fish fog.”

A study conducted by San Francisco physician Jane Hightower found that dozens of her patients had high levels of mercury in their bodies and many showed symptoms of mercury poisoning, including hair loss, fatigue, depression, difficulty concentrating and headaches. She found that her patients’ symptoms improved when they stopped eating fish. “[Mercury is] a documented poison. Wherever it’s seen, it’s been a problem,” says Hightower.

Researchers have also shown that the mercury in marine animals can cause heart problems in humans who eat their flesh. A recent report released by the Research Institute of Public Health in Finland showed that men who have elevated levels of mercury in their blood from eating fish are roughly 1.5 times more likely to suffer from heart problems, including heart disease and heart attacks.