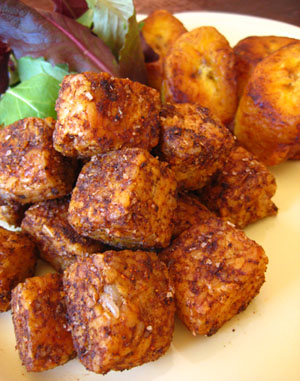 We recently held a contest where you can win free copies of Robin Robertson cookbooks, including Vegan Fire & Spice, so I decided to take a few recipes from the book for a little test drive.

One of the best that I tested was the Jamaican Jerk-Spiced Tempeh Nuggets. The recipe calls for boiling the tempeh for 30 minutes, which really helps soften the tempeh and make it slightly less nutty. I must warn that if you’ve never tried tempeh, you shouldn’t expect this to taste like tofu or frozen faux chicken nuggets you buy from the supermarket. Tempeh has a very unique taste that you may need to learn to love.

After boiling, you then brown the tempeh in a skillet until there’s a nice golden color on all sides. Next you’re supposed to toss the tempeh with the jerk seasoning, but I feared the nuggets might be a little dry for my taste, so I added another tablespoon of oil and then the seasoning. Perfect.

I’ll stop giving you the play-by-play of my tempeh nugget experience so that you can try the recipe yourself. Enjoy!