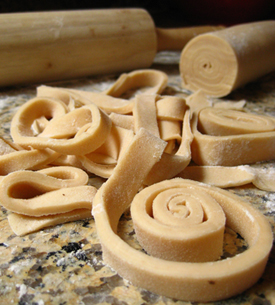 With one-dollar boxes of dried pasta available at just about every grocery store in the country, it’s not often that I think, “Wow, I need to do something more labor intensive than just boil water and make this stuff from scratch.” It’s not often, but it does happen from time to time.

Over the last couple of years, I’ve come a long way in my attempts at fresh pasta. I started out by trying to mix and roll out the dough on my baker’s rack, which is only about 12 inches wide, with a water bottle acting as a rolling pin! Needless to say, that was slightly difficult. I’ve since moved on to combining the ingredients in a stand mixer—and on a normal-size counter—but I’m still rolling out the dough by hand.

There are an endless number of ways to shape pasta after it has been rolled out, so I won’t go into detail with that. I will say that the last time I made fresh pasta, the plan was to make tagliatelle based on the video instructions on Chow.com. It was an easy cut, but my dough was a little too thick. Next time, I will roll and roll and roll some more until the dough seems paper thin.

As for the recipe, I’ve tested several, and so far this is the best I’ve found. A friend who is a chef passed this along to me, and I’ll admit that I was hesitant at first when I saw annatto on the list of ingredients. I tend to avoid recipes that call for ingredients I don’t know how to use. However, I found annatto at the major grocery-store chain near me, and it cost less than a dollar, so I quickly came around to the little seed.

You can try making this basic dough recipe by hand or in a mixer, rolled out by hand or using a machine, and cut into any shape you’d like. Enjoy!

•Combine all the ingredients in a free-standing mixer with a dough hook attachment. Set the mixer on its lowest setting and stir until a ball of dough forms. Continue mixing for another 5 minutes.

•Cover with plastic wrap and let rest in the refrigerator for 20 minutes.

•Roll out by hand or using a machine and shape as desired.