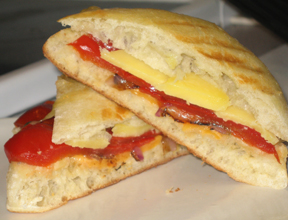 Can you guess which sandwich is the happiest on Earth? OK, I’ll just tell you because I’m impatient—it’s vegan grilled cheese!

The combination of bread and cheese dates back to ancient Roman times, but for my gourmet grilled cheese, I put a modern twist on the combination by using vegan mozzarella. I then layered the cheese with roasted red peppers and sautéed red onion slices and used grilled ciabatta bread smothered with Earth Balance. The happiest sandwich on Earth led to the happiest stomach on Earth—mine.

*Note: Add fresh basil leaves or cracked black pepper to the sandwich for a Mediterranean flair. Focaccia is a tasty alternative to ciabatta.