Would You Fry Your Friends?

The following article was written by Ingrid E. Newkirk.

PETA once had a sticker that read, “Animals Are Friends, Not Food.” Kids would put it on packages of meat in the supermarket from time to time, and it was known to show up on animal-based dishes in mixed (vegetarian/carnivorous) households.

Now, a Northampton University study shows that cows are indeed friends―with each other. And that being separated from their friends causes them distress. Not, I imagine, as much distress as being prodded up the ramp of a slaughterhouse-bound truck and hauled down a highway in all weather extremes and not as much distress as being strung up alive and dangled by a single leg while the conveyor belt moves toward the knife, but distress nonetheless. The sort of distress that children often experience when separated from their parents on the very first day of school or that victims of a natural disaster report feeling when the friend who was standing right next to them  just a moment ago is swept away. 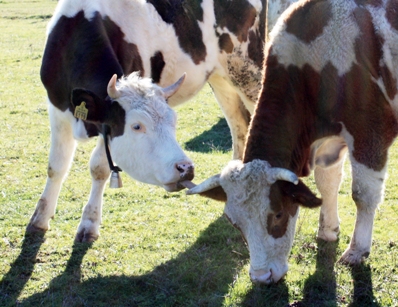 To hear that animals have friends can be disconcerting to anyone who eats meat. Acting on that fact would separate them from their rump roast and cause them distress. Although Alicia Silverstone’s The Kind Diet cookbook might soon distract them.

But it’s not just cows who bond with other cows. Studies of chickens, for instance, at Bristol University in the U.K. and elsewhere have shown that they gravitate to other chickens they know and that they are excellent mothers. And fish, the animals even a disturbing number of people who call themselves “vegetarians” still eat, are now shown to enjoy friendships, as well as having demonstrably long memories, the ability to judge the passage of time, and a delight in play.

When the majority of people face the facts about food, friends, and feelings and begin to relate to who’s on their plate, I think society as a whole will also seem a lot friendlier.