Warning! Warning! This is definitely not your typical chili recipe. If you’re dead-set in your chili-making ways—and they don’t include the use of cocoa or cinnamon—this may not be the recipe for you.

I’ve been hearing praises about this sauce-like chili from certain friends and family, but I was understandably skeptical because it’s served on top of spaghetti and includes a variety of spices more commonly found in desserts. And the fun doesn’t stop there. You also have to choose which “way” you like your chili by adding one or more of the classic toppings: onion, cheese, oyster crackers, or kidney beans.

I decided that my way is four-way chili, topped with onions and vegan soy cheese (the chili and spaghetti count as the other two ways). Stick with me here, because much to my surprise, the first bite did not leave me gagging. It left me craving more because of the richness and depth of flavor in this unique chili recipe.

My leftovers are destined to become part of a vegan “Coney”—the veggie dog, Cincinnati chili, and soy cheese wonder that’s served on sliced bread instead of your traditional hot dog bun. I guess the choice of bread really isn’t that surprising, since there’s not much about Cincinnati chili that is traditional. 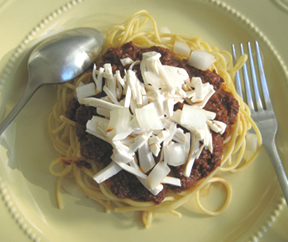