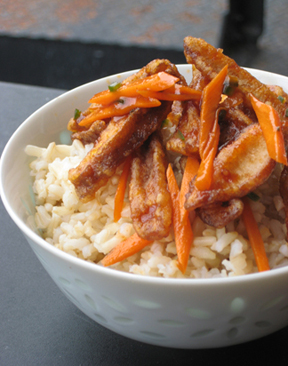 Umami is defined as the fifth basic taste and can be described as a savory, fuller flavor that involves all the senses. But to many chefs, the word means so much more.

Kevin Dunn, a chef who teaches the ins and outs of plant-based cuisine in Michigan, defines umami beautifully—and yes, I’m jealous because his palate has clearly isolated the taste:

“Umami is a Japanese term that means a true memory of flavor. One Japanese philosophy relates this to MSG and to a meaty mushroom or seaweed taste. My philosophy is that umami is a memory of flavors created by your experiences. Have you ever driven down the road and been hit with an all-consuming taste for something—say, apple pie—and the feelings are so real that you could taste the apple pie—the cinnamon, the crust, the crispness of the apple? That is umami, and all great chefs possess the ability to bring those flavors into their minds in order to develop keen flavors in their cuisine.”

Just a few of the umami-rich foods out there are green tea, tomatoes, soy beans, and mushrooms, such as shiitake and enokitake. Dried shiitake mushrooms have an especially high level of umami, and that’s why they are the perfect ingredient to use in chef Dunn’s own mock eel recipe.

The super-savory shiitakes make this simple recipe full of flavor. I added sliced carrots and jalapeños into the mock eel recipe, and then served it over brown rice. I have no clue what eel actually tastes like, so I can’t say if this is a convincing imitation, but I can say that it was good, and it may be one of the first times I’ve found umami.

Be sure to check out the recipe for mock eel!