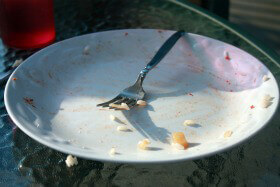 I’ve posted a couple of times before about things that meat-eaters like to say to vegetarians and vegans. But there’s no end to the arguments that some people use in an attempt to defend their dietary choices.

‘If every person in the world went vegan, what would we do with all those billions of chickens, pigs, and cows?’

When meat-eaters ask this question, they’re really saying: “You’ll never get everyone to go veg because then we’d be stuck for years feeding all those animals!”

It would be wonderful indeed if everyone went vegan overnight, but given that it’s likely to be a more gradual process, this “problem” takes care of itself. The market for animal-derived products works just like any other market: as demand decreases, farmers will reduce the number of animals that they raise. This works even if demand drops very quickly, because most farmed animals are slaughtered when they are very young. Most cattle intended for beef are sent to slaughter at around 1 year of age. Pigs are killed at just 6 months old, and chickens at as young as 7 weeks. Cows who are used for milk production are often killed at 4 or 5 years of age, and egg-laying hens at just 2 years.

‘But if everyone went vegan, farmed-animal species would go extinct!’

The threat of human-caused extinction looms for many species, such as tigers, polar bears, and many species of whales and sharks. The disappearance of these animals destabilizes ecosystems and creates ripple effects that put even more species at risk.

But domesticated animals are a different story. The role of cows, pigs, and chickens in the ecosystem can best be described as destructive. Just think of overgrazed grasslands in the American West or lagoons of pig manure polluting rivers and groundwater. In addition, many domesticated animals have been so genetically altered for fast growth and high productivity that their very existence is nonstop misery. Modern pigs, unlike their wild ancestors, grow so large that they can suffer crippling leg and foot problems if they are not slaughtered at a young age. Cows used by the dairy industry produce so much milk that their depleted bodies break down after only a few years. And many chickens succumb to heart problems and broken bones before they even make it to the slaughterhouse. Surely, the “extinction” of a human-created species whose members have been designed to suffer is no tragedy.

Meat-eaters who claim that they eat animal-derived products because they are concerned about extinction might be running out of justifications for their choice to support a cruel industry.

‘I’ve thought about going vegan, but I could never give up barbecued ribs/cheesecake/fried chicken/[insert favorite animal product here].’

I call this one the “all or nothing” argument: “I can’t possibly be 100 percent vegan, so what’s the point of making any changes to my diet?” My answer: “Who says it has to be all or nothing?”

One of the biggest benefits of a vegan diet is that it reduces demand for animal-derived products, which in turn reduces the number of cows, pigs, and chickens who live short and miserable lives to be slaughtered for food. Anything that reduces the demand helps these animals.

So, if you can’t go vegan because of your lifelong love of barbecued ribs, fine. Give up some other kinds of meat instead and at least you will be sparing some chickens and fish. Is cheese your favorite food? Maybe you can start helping animals by giving up beef, chicken, or eggs. Is the very idea of a vegetarian diet daunting because you just like the taste of meat? How about committing to meatless Mondays and trying some tasty plant-based recipes once a week? Even a small change in your diet is very much worth doing. Don’t let perfectionism get in the way of helping as many animals as you can!