You’ve got your robes on and wand in hand, and you’re off to Hogwarts—at least, the replica of it at The Wizarding World of Harry Potter. Luckily, The Wizarding World offers drinks, sweets, and other foods that would satisfy even Crabbe’s (R.I.P.) and Goyle’s seemingly insatiable appetites, all made without harming cows, pigs, chickens, or other animals used for food. And after hearing from PETA and a campaign by The Protego Foundation, Universal Studios Florida is now allowing customers to order a vegan version of the iconic Butterbeer by simply asking to hold the foam on the iced or frozen varieties!

So mount your Firebolt and pack your trunk, because you’re on your way to the most magical place in the world—at least if you’re a No-Maj or Muggle. 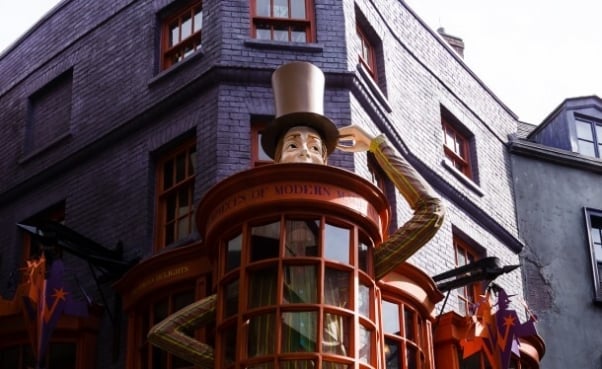 Has Filch, the caretaker, given you a detention? Looking to make his day a little bit more … eventful? Then your first stop should be Weasleys’ Wizard Wheezes. Here, you’ll find an assortment of toys, gadgets, and jokes to make even Professor Binns’ History of Magic class seem fun! If you’re looking to celebrate the fall of the Dark Lord, be sure to snack away on an edible Dark Mark lollipop.

But don’t leave before you pick up some dairy-free Puking Pastilles—you may need an excuse to get out of that transfiguration test that you didn’t study for. 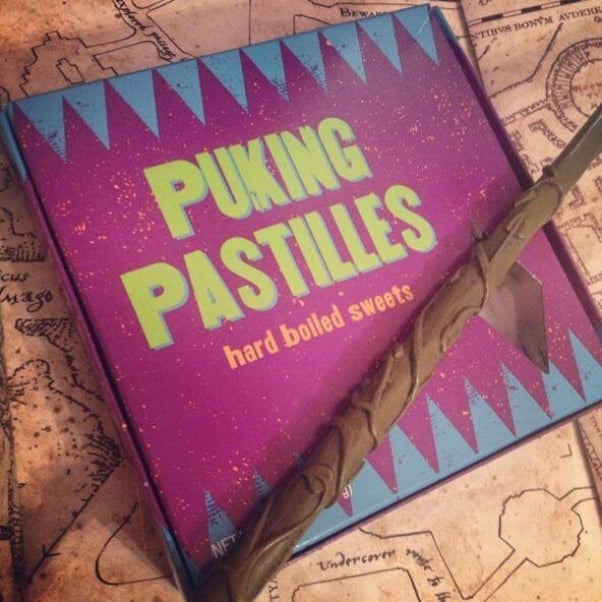 Right across from Weasleys’ Wizard Wheezes is the world-famous Leaky Cauldron—the perfect spot to fuel up for a day full of shopping or fighting the Dark Arts. Here’s what to get and how you can veganize it:

Note: The margarine used at the Leaky Cauldron is vegan! 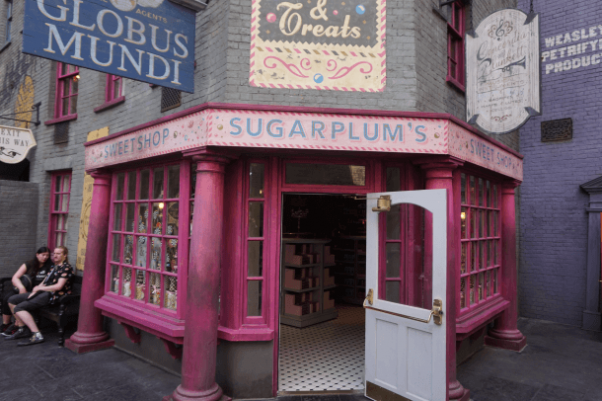 Now that you wish you could do magic to engorgio your stomach, stop by Sugarplum’s sweetshop on the other side of Weasleys’ Wizard Wheezes. There, you can pick up some delicious vegan sweets, like Candy in a Can, which is full of delicious watermelon and strawberry candy; Tongueburners Tooth Splintering Strong Mints, which pack a magically powerful punch; and others, like Pear Drops, Pineapple Cubes, Fizzy Wizzy, Sherbet Lemons, and more! 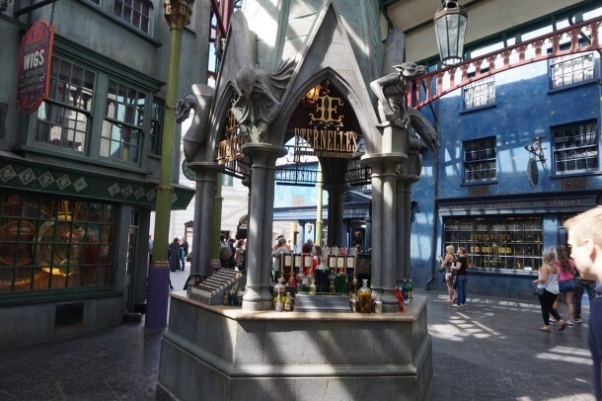 After watching the talented Celestina Warbeck and the Banshees perform on the Diagon Alley stage, rehydrate with a delicious Gillywater infused with one of Eternelle’s elixirs! These little potions turn any boring bottle of Gillywater into a flavorful drink that may or may not induce feelings of euphoria and peace, protect you from fire, or cause uncontrollable babbling. All these flavor enhancers are vegan and make for a great drink to keep you going throughout the day.

Now hop aboard the Hogwarts Express, because your next stop is Hogsmeade. (Hope you got the Dursleys to sign your permission slip!)

Hogsmeade at Universal’s Islands of Adventure 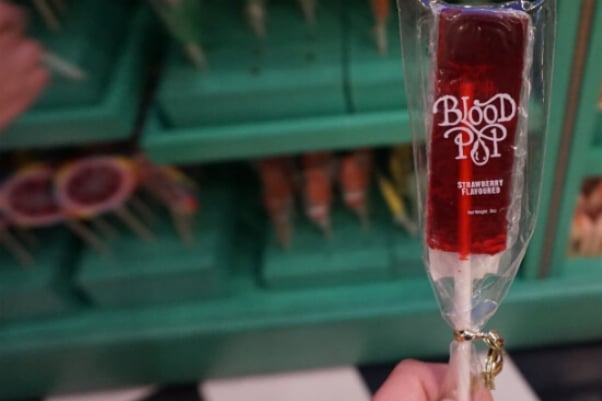 Hop like a chocolate frog into Honeydukes to satiate that sweet tooth. Like Sugarplum’s in Diagon Alley, many of the candies here are vegan. Pick up a jar of fiery Cinnamon Balls or of one Dumbledore’s favorite candies, Sherbet Lemons. Other tasty vegan candies include Pepper Imps, Jumping Snakes, Blood Pops, Sugar Quills, Candy Floss, Fruit Slices, and more.

Looking for something healthy for a wizard on the go to eat? Stop by one of The Magic Neep carts, located in Hogsmeade and Diagon Alley. You can stock up on some more Pumpkin Juice and Gillywater as well as some fresh fruit like oranges, grapes, or watermelon or a fresh fruit cup. For a satisfying meal on the go, try the Shepherd’s Pasty Pie, a hand pie in a flaky, savory pie crust filled with beefless crumbles and vegetable stew. 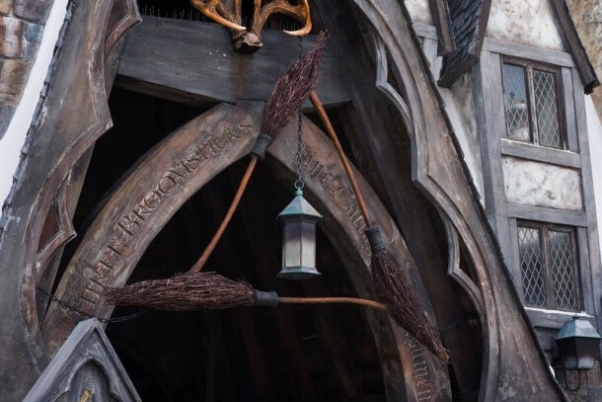 Before you leave Hogsmeade, be sure to stop in for a final meal at the Three Broomsticks! The inn is full of the latest Wizarding World gossip and also delicious vegan-friendly foods:

As you leave the park feeling just a little closer to the magical community, remember: Whether you come back by page or by the big screen—or via Universal Studios—Hogwarts will always be there to welcome you home, with vegan options aplenty.