So, Why Do You Eat Meat? 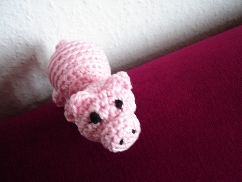 Recently, I realized that I’ve been living around vegans for too long. I used to regularly attend events where corpses and cheese-laden dishes were the norm and many people thought “veganism” was a type of rash. Several years ago, when I was still in college, you couldn’t stop me from talking to people about factory farming, how milk causes osteoporosis, and why vegans rarely have heart attacks—if it had to do with why people shouldn’t eat animals, I wanted to talk about it. Now, I rarely talk to people who aren’t already vegan, and when I do, it can be rather frustrating. I get a little exasperated when I hear “But I need protein” or “I just love steak,” and I would rather roll my eyes than engage them in conversation.

Obviously, this sort of attitude isn’t good for helping animals, so I try to muster a smile and politely explain that I eat all sorts of wonderful foods and, as you can see from my hips, I clearly don’t starve. The unfortunate reality is that after a while, it can get draining to have to explain why you don’t eat rotting flesh (as if this should require an explanation), to keep a sunny face while someone makes a disgusted frown and sniffs at your perfectly delicious tofu dish at a church potluck, and to be the best advocate for animals that you can be.

They ask: What do you eat?

I say: I eat everything! Last week I had enchiladas, calzones, and faux-chicken Caesar salad. Tonight I’m having barbecue tofu and brownies! It’s so easy to make a vegan version of my favorite foods, and my diet has way more variety now than it did when I ate animals.

They say: I could never give up cheese. How do you live without it?

I say: I’m from Wisconsin, so giving up cheese was a big deal for me. But I found that once I stopped eating it, not only did I not notice it was missing, it also started to be really unappealing. I’ve had enough cheese-free burritos, veggie burgers, pizzas, and macaroni to know that all cheese really adds is fat and cholesterol. The vegan versions not only taste better but are also better for me.

What are some of your favorite responses to those inquiring, meat-eating minds?